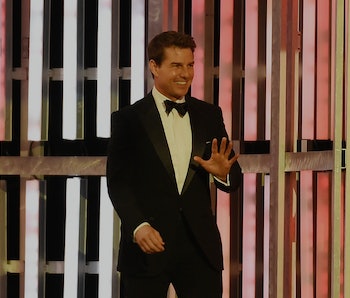 Last week, Universal Pictures announced the first movie in what it hopes will become a cinematic universe of films based on its classic monster character. The Mummy will be a revisionist spin on the timeless horror tale with a present day timeline that promises “terrors that defy human comprehension.” The film will star Tom Cruise, though unfortunately, he won’t play the title role.

The current Hollywood landscape demands sprawling, connected, and brand- name movie series; redoing stories like The Mummy, Dracula, and Frankenstein is an obvious business choice for Universal. They have the rights to what is probably the first cinematic universe, leftover from the series of movies that helped the studio make a name for itself in the early 20th century. More importantly for the studio now: it’s there for the taking. But that isn’t necessarily a good thing.

Rebooting such iconic films requires an extra amount of care, given how much fans love the originals. Here’s what Universal needs to do to ensure the Universal Monster Cinematic Universe succeed, critically, financially, and otherwise.

5. Cast movie stars, but get newcomers too.

For all the shrugs the new reboot of The Mummy has caused since it was made official, you can’t knock its cast. If you want to sell a movie, Tom Cruise is still one of your best bets, and Universal is smart to bring him onboard; he’s likely worth the paycheck in this context. The production recently also cast Russell Crowe as Dr. Henry Jekyll — so all they need to do is cast Will Smith in another Universal Monsters movie, and they’ll have a trifecta of world renowned movie stars to help ensure big box office numbers.

But a look at the supporting cast of The Mummy proves Universal is going about this the right way. Sofia Boutella, the promising actress from Kingsman and Star Trek Beyond, is poised to become a breakout star. Courtney B. Vance, hot off one of the best TV performances in a long while as OJ Simpson’s defense attorney Johnnie Cochran in American Crime Story, will get a chance to bring that nuance to the big screen. This cinematic universe has an opportunity to be defined by its relative newcomers — on top of its big talent.

Be like The Force Awakens. That movie had an intimidating pedigree to live up to, and like J.J. Abrams’s blockbuster, the Universal Monsters Cinematic Universe will be coming off a string of clunkers that derailed the series for quite a while. Details like the special effects for the Wolf Man or the Creature from the Black Lagoon are key. Anybody can and has taken the overdone-CGI route, including the movie that was supposedly going to kickstart this cinematic universe, Dracula Untold. Since Universal is throwing all their resources into this multi-movie endeavor and honoring the makeup and effects of the 1930’s originals, they should put the cash toward impressive practical effects instead of co-opting classics and drowning them in bad computer-generated imagery.

Universal is in a relatively tough spot. Everyone is familiar with characters like Dracula, Frankenstein, the Mummy, et. al, but only in the vaguest terms. It’s a safe bet that most contemporary audiences have never seen the Dracula and Frankenstein movies from 1931 and The Mummy from 1932. The tendency with these new movies is to include tips of the hat to Bela Lugosi and Boris Karloff (and they wouldn’t be doing us any favors referencing the Brendan Fraser Mummy movies), but will anybody really want you to reference 80-year-old movies? It should be avoided, or at the very least, be done sparingly, in the right way. The press release announcing the 2017 version of The Mummy, which included a sly reference to Bride of Frankenstein, made it seem like Universal knows this already.

2. Do include self-referential moments.

Callbacks are one thing, but intra-cinematic universe nods are another. This was perfected — to varying degrees of success — by the almighty Marvel Cinematic Universe, whose movies sometimes seem like one big self-referential spectacle. But when it’s done right — like when multiple characters reference the devastating fallout from the Battle of New York in The Avengers during subsequent movies — it ties everything together as a cohesive narrative package. The argument could be made that the cinematic precedent to this was, in fact, from the original Universal Monsters movies. The new movies should try to get into the crossovers like Frankenstein Meets the Wolf Man, House of Frankenstein, or House of Dracula. If all these screwed up monsters do live in the same universe, you’d imagine some of them would be on each other’s radars. With Crowe’s Jekyll popping up in the 2017 Mummy, this looks to be the case.

The most important thing to remember about these stories, regardless of any contemporary context or action-movie rebranding, is that they’re all essentially tragic and macabre tales of the human sprit’s dark side. If Universal is going to redo these characters as $100 million tentpoles, the savviest thing they could do is to try and retain the horror and morbid themes that inspired them. The easy route would be to emphasize the explosions and Tom Cruise firing weapons while cruising around on a motorcycle through some far flung locale, but do we really need that? These movies shouldn’t have to adhere to a four quadrant, PG-13 mandate that limits the extent to which they can tell their gruesome stories. Push the envelope by staying dark, horrific, and scary.