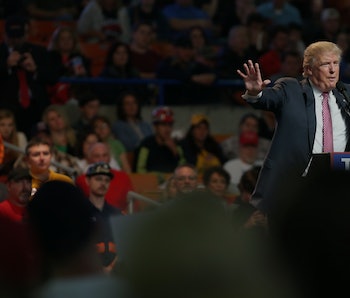 Last week, celebrity billionaire Donald Trump told supporters who turned out for his West Virginia rally to skip voting for him in today’s GOP primary. “The primary is gone,” the presumptive party nominee boasted from the stage.

This sort of confirms that Trump misunderstands how the nomination math works — at least not the way it works in West Virginia.

The magic number of GOP delegates needed to become the party’s candidate for president is 1,237. Trump has 1,020. Even before they dropped out, Texas Senator Ted Cruz and Ohio Governor John Kasich had been mathematically eliminated from winning the nomination outright, meaning that their only shot at being the GOP’s candidate would have been through a contested convention (hello, Cleveland!). The only one for whom it’s a possibility to get the uncontested nomination is Trump.

Which brings us to today in West Virginia where voters will award 34 Republican delegates:

That last part is what makes West Virginia’s primary election a little different, and since Trump is telling primary voters in the Mountain State to “forget this one,” it appears that he doesn’t exactly get how those 22 delegates are divvied up.

“The most important votes [West Virginians] will cast are for the individual delegates themselves,” Conrad Lucas, West Virginia Republican Party chair, told ABC affiliate WCHS in Charleston. “If they support an individual presidential candidate, they vote for candidates to the national convention to be delegates who have committed to supporting that nominee.”

At this point, Trump’s nomination doesn’t really hinge on West Virginia’s 34 little delegates. But if he, the last Republican with an active campaign, does want to avoid an open convention nomination process, he’ll probably want to seek out every delegate that remains up for grabs prior to his obtaining 1,237. So Trump’s advice to West Virginians should have been to get out of the house today to vote for him and vote for the delegates who have committed to him.

Even if Trump were giving those voter directives under the assumption that he’d be entitled to the lion’s share of delegates as the defacto popular vote winner in West Virginia’s state primary, there aren’t, like, rollover votes, wherein if you don’t vote in your primary you get to vote twice in the general. He must at least know that, right? I dunno, maybe Trump was telling people to save their energy? Like if they stayed home today, they’d be sufficiently energized to vote for him come November. We’ll probably never know for sure.

Also, how much must it suck to take the time to go to one of these exhausting, protracted rallies in an attempt to show support for your political idol, only to have him tell you he didn’t care whether or not you voted for him because your state wasn’t important enough to make a difference? In keeping with the tradition of nothing horrible Trump says about his supporters in any way lessening their devotion to him, though, they’ll probably still vote for him in November — you know, when it’ll matter, apparently.