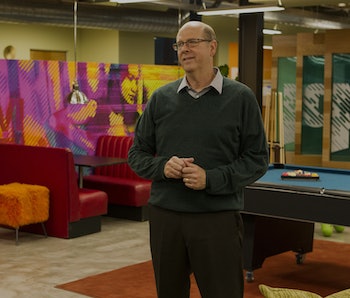 “It’s not TV. It’s HBO,” the advertising catchphrase dreamed up in the mid-90s by the firm BBDO New York, debuted three years before The Sopranos, eight years before The Wire, 10 years before Deadwood, and 15 years before Game of Thrones. It insinuated quality without being particularly specific about it. After all, the channel was best known two disparate things: mini-series and live events (mostly boxing). Now, two decades later, HBO is a programming powerhouse and the slogan seems even more spot on. As Silicon Valley seems determined to demonstrate, HBO doesn’t air TV shows. HBO airs HBO, which is a genre unto itself with its own aesthetics, constraints, and recurring motifs. Foremost among these is the notion of regicide. Wearing the crown on HBO, as “Action” Jack Barker clearly knows, means wearing a target.

Barker knows this because — like every other HBO character — he’s up on his Ralph Waldo Emerson. Or so we’re led to believe.

“Meinertzhagen’s Haversack,” the third episode in Silicon Valley’s already uneven third season, is about an insurrection. The engineers behind Pied Piper want to build a platform, but have been ordered by Barker, the CEO, “to build an appliance,” a hack-proof compression solution for business applications. Former CEO and sad parakeet Richard Hendricks confronts Barker then, fails to convince him to change his mind, then goes over his head to Laurie Bream, the head of the venture capital firm backing Pied Piper. When Bream calls Barker, asking him to pivot, he offers his resignation instead, a gambit that works. He keeps his seat and gives Hendricks the following trenchant piece of advice: “If you’re going to shoot the king, you better be goddamned sure you kill him.”

It’s a line that stands out because it sounds badass. But it’s also a reference to something less than totally badass, a response Ralph Waldo Emerson sent future Supreme Court Justice Oliver Wendell Holmes over a collegiate attempt to refute the supremacy of Plato’s classification of ideas. “When you strike at a king,” Emerson, then a 60-year-old Unitarian minister, famously wrote, “you must kill him.” So, we must conclude, Jack Barker knows how to read a book.

Maybe. Maybe not so much. The more common pop-cultural regicidal formulation is this: “If you come at the king, you best not miss.” That’s a line Omar Little pretty much spits it after a bit of not-so-friendly crossfire. In other words, Barker is either into transcendentalism or The Wire. He’s an upper class white dude in his fifties so it’s pretty clear which is more likely.

So, is HBO quoting itself at this point? Is it becoming a sort of ouroboros of middle school philosophizing? Yes and no. The repetitions don’t feel intentional so much as inevitable. The Sopranos finale could best be summarized as “Did they kill the king?” and Game of Thrones might be well served by the tagline, “Various attempts to kill kings.” The phrase even gets dramatized in the second season of GoT when a wine merchant (or assassin, or whatever) tries to poison Khaleesi. He fails, and the implication seems to be that the response is pretty brutal. There’s a reason you’ve got to give her grace the coup de grâce: Don’t and all hell comes raining down.

It’s not surprising that killing leaders is a recurring theme on shows obsessed by violence and power. It is, however, a bit surprising to see it on Silicon Valley, a show about conflict-avoidance and powerlessness. The admonition from “Action” Jack and the whole skunkworks plot line, which sees the engineers working toward their own ends despite the orders of their ostensible commander, feels like a reversion to the network’s mean. Is it true to the characters? Not exactly. The ringleader here is Richard Hendricks, who has the charisma and backbone of an earthworm. It seems unlikely that he wouldn’t just roll over and prioritize in Trello. It feels forced. It feels like HBO forcing a show into the HBO mold.

In creating a feudal dynamic, Silicon Valley is ditching its futile dynamic, which is what made it stand out. Now we’ve got another show about killing kings and another Joffrey Baratheon — may he choke upon his coconut water.