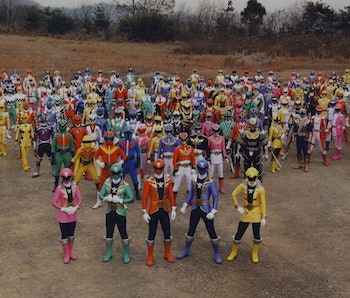 Nostalgia-driven pop culture dictates a Power Rangers movie must happen. And the current attempts to inject maturity into kids content means that it has to be “gritty” and “edgy.” Saban, the company that brought the Power Rangers to America, has complied with those edicts, and debuted earlier this week the new costumes that the teenage warriors will wear in Dean Israelite’s reboot. They look weird and grotesque, but they’re also not as cringe-worthy as some costumes that have appeared in the show’s long history.

An adaptation of Toei Company’s long-running Super Sentai franchise in Japan, Power Rangers follows three to five teens (or young adults) who save the world using martial arts and colossal machines known as Zords. After a year, the show refreshes with a new cast, arsenal, and yes, themed costumes. A mix of Marvel and Voltron with dashes of Saved by the Bell, Power Rangers can be fun in a very campy way, which could make a gritty and serious movie a misfire.

Now that we know what 2017’s Power Rangers will look like, let’s take a peek back at the show’s 20-plus-year history to rank the costumes. All of them. Just a note: we’re sticking to just Power Rangers, because Super Sentai has been going on since 1975 and that would take all day. (Besides, the best is 1991’s Jetman. Nothing outclasses those).

The 20th anniversary season that celebrated the whole franchise, unfortunately, sported the worst costumes ever. Based on 2010’s Tensou Sentai Goseiger, the theme was supposed to evoke mythology. But instead of looking like mighty Greek warriors or Judeo-Christian angels, the Rangers wound up looking like North Korean bootlegs. Look closely at the suits —they’re basically wearing crop tops.

Lost in translation from its origin Japanese series, Zyuden Sentai Kyoryuger, went for the Samba/musical aesthetic, hence the vaguely Central-American asymmetrical design. In adapting it for American audiences, the Samba thing was dropped, instead focusing on the lucrative, merchandise-friendly dinosaurs. As a result, the DinoCharge costumes don’t make sense, and look dumb.

It’s a bummer that the most epic, Star Trek, Alien, and Starship Troopers-influenced series in Power Rangers also has the fugliest Charlie Brown-looking designs. Lost Galaxy is a legit epic series, recalling William Gibson and the ‘90s zeitgeist of budget sci-fi, but boy are the costumes messy. Some of the helmets are nice, but below the neck is yuck. It gets worse when they don the Lights of Orion armor.

But at least the Magna Defender looks badass — he was the first dude in the whole show to wear a cape.

In general, I advise you to not watch Power Rangers Wild Force. After the thematic high that was 2001’s Power Rangers Time Force, Wild Force is a sorry follow-up with cardboard acting and poor directing. The costumes are no better, saved only by the slick Silver Wolf Ranger and the claws that come out of their gloves, which remind me of Marvel’s Black Panther.

It makes sense the first government-funded, militarized Power Rangers team would sport a no-nonsense design, but any Resident Evil fan will wonder if these Rangers are actually fighting for the evil Umbrella Corporation.

Regardless, the Lightspeed Rescue Rangers look more bland than bad. They get bonus points for nice visors with cool “breather” mouth-pieces (useful for rescuing people from fires and hazardous environments, which these Rangers do). The American-made Titanium Ranger is the only one who looks good.

Amid the Harry Potter craze, Toei produced Mahou Sentai Magiranger which arrived in the U.S. as Power Rangers Mystic Force. While the colors of the costumes really pop, the waist-length capes look way goofy. The additional Rangers who join, like Daggeron and Udonna’s White Mystic Ranger, look cumbersome and busy.

While the 2008 Super Sentai series Engine Sentai Go-Onger was an acid trip with cartoon race cars, Disney (who had the license to the franchise) went in the opposite direction and made Power Rangers RPM a diesel-fueled, post-apocalyptic drama that would fit in today’s CW model. It’s the darkest Power Rangers ever, although its smart humor makes the series match the tone of a Marvel movie.

The cartoonish costumes with an ill-conceived silver “V” (which stops at the back, for some dumb reason) are pretty unsightly. But they don’t hinder any enjoyment of this oft-overlooked sci-fi gem. If you need any more reason to check it out, iZombie star Rose McIver played Summer, the Yellow Ranger.

Like RPM, Turbo is another auto-themed season when the Zeo Rangers, overnight, became gear heads. Many ‘90s kids may have a soft spot for these costumes, since they appeared in the (terrible) Turbo: A Power Rangers Movie. But as far as the tiresome automotive theme goes, Turbo doesn’t look half bad. Not the best; but far from the worst.

Power Rangers Time Force is one of the best seasons the show ever produced, but while the futuristic costumes are sleek, they are also too efficient. Each Ranger lacks any distinct identity, which makes them effectively look boring. The Johnny-come-lately of the group, the Quantum Ranger, is a repackaged Red Ranger who looks better than the real Red Ranger. He’s also a dick (and one of my favorite Power Rangers of all time).

Power Rangers Operation Overdrive is another bad season with embarrassing production all around, but the costumes look sick: with shiny silver trims that pop with vibrancy. Mute the volume and just watch the action, it’s worth it to see these suits have a go.

Another efficient uniform design, In Space gets bonus points for its sleek helmets and sharp white cuffs and boots. Because of the contrasting Japanese and American productions, the Silver Ranger looks like a bad David Bowie knockoff one minute, but then a badass in mercury the next. Overall the Space Rangers lack a zest that could have benefitted them — and the rainbow blocks on the chest is weird. But those helmets tho.

The color scheme of the Ninja Storm Rangers is the most jarring to anyone vaguely familiar with the idea. There’s a Red Ranger, Blue Ranger, Yellow Ranger, Green Ranger… a Crimson Ranger, and a Navy Ranger? WTF?

But these suits are cut above most. The Green Ranger looks amazing in his golden shield (reminiscent of Mighty Morphin’s Green Ranger), and the Crimson and Navy Rangers — who come from a rival ninja school — look badass together, but a little awkward when apart.

I still don’t know what the “theme” of Zeo was. The Japanese series Choriki Sentai Ohranger was supposed to be a neo-Egyptian/ancient civilization motif, and that looks more obvious with the amazing Gold Ranger. Without him, the Zeo Rangers sport the sharpest costumes ever but look better with the black and gold-armored Gold Ranger by their side.

When the Mighty Morphin’ Rangers were sent to find the Zeo Crystals (which would transition the show into Power Rangers Zeo), the Alien Rangers of Aquitar protected Angel Grove in their absence. And they looked awesome.

Based on 1994’s Ninja Sentai Kakuranger, the ninja stuff was glossed over, but it didn’t stop the Alien Rangers from looking ace. They have a simple design, maybe too simple if we’re behing honest, and the round helmets look goofy in some angles. But the color scheme is vibrant with neutral Black and White Rangers and a Red, Blue, and Yellow Rangers to balance them. The simplicity of the Alien Rangers made them one of my favorite things to doodle in grade school.

Look, Super Megaforce sucks. Don’t watch it. But the pirate-themed Kaizoku Sentai Gokaiger costumes Super Megaforce used are incredible. The popped collars — because they’re pirates — is hilariously absurd. The Silver Ranger’s helmet modeled after a bandana and sunglasses, ALSO absurd. Everything about the costumes are done with such confidence and bravado you can’t help but love it. On top of that, the black inner suit provides a beautiful contrast to every color.

SPD is a fun Blade Runner-esque, sci-fi police procedural, but the Rangers’ asymmetrical design with black numbers that extend down the left arm is pure genius. The Omega Ranger looks even better, with white, gold, and navy blue letting him stand out wherever he is. The Shadow Ranger, the alien mentor and commander of the SPD Rangers, looks authoritarian and regal in an armored outfit that takes cues from Batman, RoboCop, and Darth Vader, and he looks utterly badass. They all do, really.

They’re just so clean. The kanji helmets may look bizarre and probably don’t make sense to non-Japanese speakers (full disclosure: I’m not), but after a while when you see them in action, they grow on you. I wish Akira Kurosawa could have used these costumes, just once.

Aside from being the legitimate, modern successor of everyone’s favorite Mighty Morphin’, the costumes in DinoThunder are beautiful. The core three Rangers are great, but the sharp Black Ranger (Tommy the Green/White/Red Ranger’s fourth color) and fearsome White Ranger look SAVAGE. The White DinoThunder Ranger is hands-down the single best-looking Power Ranger of all time.

I’m allergic to jungle/wild animal themed seasons (I blame Wild Force) but heavens do the Jungle Fury Rangers look gorgeous. A cross between animals and Chinese kung-fu, Jungle Fury is how I wish all modern Power Ranger teams looked. The lack of belts gives these Rangers a fun, playful aesthetic. The silver-studded purple Wolf Ranger, modeled after a Muay Thai kickboxer, is a real treat to look at.

Technically this shouldn’t count because Power Rangers Ninja Steel won’t air until next year. But coming from 2015’s Shuriken Sentai Ninninger, these new Ninja Steel Rangers are already the best-looking costumes the franchise has ever had. The silver accents add to the shuriken motif and the sashes look so dope. The designers of these costumes took the best parts from Samurai and built upon it. I can’t wait for next year.

The OG Power Rangers set the standard for 20 years and no one else has come close.

The diamonds, subtly accented by dinosaur teeth, pop on the chest, arm, and boot cuffs. The helmets give each Ranger a clear identity, which is why I lament the 2017 movie’s designs. The Green Ranger, with a gold chest plate and raised fin on his helmet, looks regal AND savage. Lost in the adaptation is the Tolkein-esque aesthetic 1992’s Kyoryu Sentai Zyuranger emulated, but if you squint watching Mighty Morphin’ it’s there.

Mighty Morphin’ Power Rangers is not the best the series has to offer. Watch DinoThunder, RPM, or Lost Galaxy for something worthwhile. But as far as costumes go, these have remained a pop culture staple for 20 years for good reason: They’re still mighty.