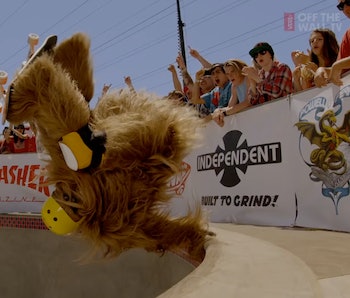 If you hadn’t noticed yet, today is Star Wars Day. It’s ostensibly for fans of the galaxy far, far away to band together and let it be known that they love watching the epic space soap opera formerly owned by George Lucas. Since it was first released in 1977, the series has become a worldwide phenomenon, so much so that corporations and brands want to try and get in on the Star Wars Day celebrations too. After all, corporations are people too.

So how does a faceless business empire try to portray that they’re with-it, and hip, and all about what the kids are into these days? Well, social media, that’s how! More and more brands are tweeting, instagramming, and throwing out increasingly ridiculous and tangentially related messages just to show that they know what Star Wars Day is. It undercuts the fan-focused spirit of the day, but it’s also hilarious to see how shameless these brands actually get. Here are our 50 favorites.

50. John Kasich has probably never seen Star Wars. His very next tweet was one about him suspending his campaign for president. Related?

49. A delicious, kind of disgusting stormtrooper.

48. Love Star Wars? Hate your spouse? We’ve got you covered.

46. Han and Chewie would never need clearance to fly out of Heathrow.

44. The last thing to think of when we think of Star Wars is golf, but this is great.

42. What’s the deal with the Legos? Is this for cameras or toys?

41. Use the Force…to protect all your digital stuff.

40. This is almost as boring as the prequels.

39. GEICO could’ve done better than this. This is just a lazy shameless plug.

36. A possible candidate for the Han Solo standalone movie? Nah.

35. Ooooh, we see what you did there. Forest, and Force. Clever, very clever.

34. Darth Maul was definitely into vaping.

30. Who knew Chewie could shred?

27. Rey would definitely be the captain of her hockey team.

26. Playing hockey with lightsabers is unsafe.

24. Distracting people from Johnny Manziel by talking about Star Wars.

23. Like hockey, it’d also be far too dangerous to play golf with a lightsaber.

21. Points deducted from the Charlotte Hornets for the dude on the left wearing a Kylo Ren helmet with a Darth Vader costume.

19. Who cares about cheating government emission regulations, these Volkswagens have lightsabers!

18. Not the worst battle to have during a Lyft ride.

17. Just putting this out there, but Olympic fencing should include lightsabers.

16. Maestro from the darkside.

15. We prefer a Quizno’s ad that didn’t reach so far

13. Would Darth Vader really drink 2016 Earth’s 7-Up? How would that happen? Is there a special straw?

10. It takes less than 12 parsecs to digest this thing.

9. Why does the Little Caesar’s guy have chest hair? Also, bonus points for the breadstick lightsaber.

7. The first order of business would be to take a better photo of these scrumptious chicken biscuits.

6. Two people died here and it was abandoned by some teenager, but it’s definitely worth a stay! They have picked an arboreal hut on Endor instead of a crime scene whose most recent feature is a pair of blackened skeletons.

5. Feel the Force, and the THC, flow through you.

1. The most evil empire of all.