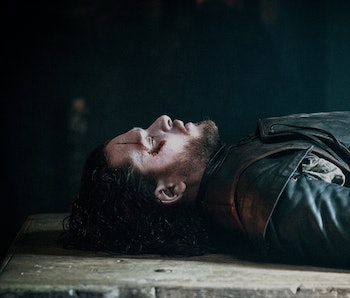 At this point, it’s commonly accepted among fans that while Jon Snow might be dead, Game of Thrones isn’t done with Kit Harington’s Jon, whatever his new last name might be.

The most prevalent theory is that Melisandre will resurrect him the same way Thoros of Myr resurrected Beric Dondarrion in Season 3 (incidentally, Thoros of Myr is returning this season, hmm). There are a number of factors feeding this theory: GOT has taken pains to emphasize Melisandre’s enigma and place her at The Wall with him, the show spent much of “The Red Woman” lingering on Jon’s dead body to a borderline comical extent, and because the show has featured Kit Harington on all the Season 6 posters. Where was Oberyn on the Season 5 posters? Where was Robb Stark on the Season 4 posters?

But the biggest contributing factor is that Rhaegar Targaryen and Lyanna Stark are Jon’s real parents — and what would be the point of revealing that information if he remains dead? Game of Thrones will reportedly include the Tower of Joy and takes us into those events this season. If he’s just a corpse, we’d greet the news with, “Okay, great so he could have had a claim to the throne — too bad he’s dead!”

So, let’s be honest, he will not stay dead, in spite of showrunners’ and Kit Harington’s insistence that Jon Snow is dead. Jon Snow is dead, but Jon Targaryen, Jon Stark, or Jon who-knows will live to fight more White Walkers.

True, he wasn’t back in the first episode of Season 6. But that wasn’t entirely surprising, considering the show’s penchant for trolling its fans. When will the deed happen, then? After examining the evidence, we think it will be episode 4. Check out the official HBO press release for episode 3, which will be called “Oathbreaker:”

The key part is Bran’s story: “Bran meets the past.” As we know from interviews with Isaac Hempstead-Wright, Bran’s storyline this season will involve looking into “important events” from the past and future through his visions.

“Bran is beginning to piece them together like a detective, almost as if he’s watching the show,” Hempstead-Wright told Entertainment Weekly. The Tower of Joy — which is where Jon was born, if you subscribe to the theory about his parentage — is a very important event. And just as it would be pointless for Jon to stay dead if the show intends to finally reveal who his mother is, it would be equally silly to bring him back before we understand his background and why he’s crucial to the story.

We’ll find out in episode 3 as Bran Sherlocks his way through it. That means episode 4 will be the magic hour. There’s still a chance it might be episode 5, as it will be reportedly called “The Door”, which could perhaps hint at the door between the living and the dead. But for now, our money is on episode 4.

And if we’re wrong, the Iron Bank can come collect its debt.