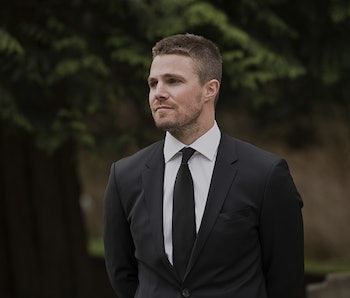 Arrow has finally done it. Arrow has, finally, forced me to admit it: Arrow is not a good TV show anymore, at least not now. The centerpiece series that started the evolving, expansive DC TV universe has mutated into a horrid, audio/visual white noise. For too long I went along with incomprehensible plots, smart characters doing stupid things, and hackneyed storytelling, because, it’s Arrow. It’s fun. No more.

This week’s “Canary Cry” has forced my hand. Bad pacing, shoddy filmmaking, spoiling its superior younger sibling The Flash, and irrational character choices be has rendered Arrow into a bland, tonally inconsistent hour of “The hell am I watching?” What happened to Arrow?

After the death of Laurel Lance (Katie Cassidy), also known as the Black Canary, the rest of Team Arrow spend their time mourning their fallen comrade — and for Oliver (Stephen Amell), his first love. But it’s not long, because there’s an imposter Black Canary using Laurel’s equipment who goes on a hunting spree against some of Star City’s elite, especially Ruve Darhk (Janet Kidder). The “Black Canary” is just a teenager, Evelyn (Madison McLaughlin), whose family the Green Arrow failed to save from Darhk during the midseason finale.

Killing Black Canary, an important part of the Green Arrow’s story, was a bold move that would have been a good one for the show… if it had been handled with delicate care. But Arrow is not delicate. Arrow is a drunk jock stumbling into the living room at 3 a.m., which about just as much logical sense. In one scene in “Canary Cry,” Green Arrow stops Diggle (David Ramsey) from killing Ruve, because killing makes the good guys no better than the bad… and then Laurel’s funeral, Oliver vows to kill Damien Darhk.

Nothing makes sense in Arrow anymore. Why bother trying to make sense of it? Oliver is going against his vows, even though he told Diggle not to. Laurel Lance is dead because it’s a convenient plot device. Diggle is just an angry solider now. Thea hasn’t made any sense since she came back to life way last season and I’ve long given up trying to figure her out. Felicity is a whole other mess I don’t have room for here.

Perhaps the most egregious sin committed by Arrow was the sheer absurdity of Oliver, at Laurel’s funeral, revealing that Laurel was the Black Canary. At her funeral. “Hey so this person we love? She’s dead because she was a vigilante.” “Canary Cry” is about legacy, and how fragile it can be. Evelyn stealing the Black Canary’s identity was tainting Laurel’s legacy, so Oliver thought the best way to solve it was … revealing the deceased and beloved public figure was the vigilante?

Just to add salt to these burning wounds, “Canary Cry” spoils The Flash. The timelines are wonky, but currently on The Flash Barry Allen (Grant Gustin) doesn’t have his powers, but he makes a guest appearance on Arrow at the funeral — late! — before rushing off to nowhere, with his super speed. Thanks for stopping by?

Though we knew Barry had to regain his Speed Force eventually, it’s going to make tuning into next week a lot less exciting. Is this what it’s like when critics complain superheroes can’t die? I don’t want the Green Arrow to die, but “Canary Cry” is sure making me wish it were possible.