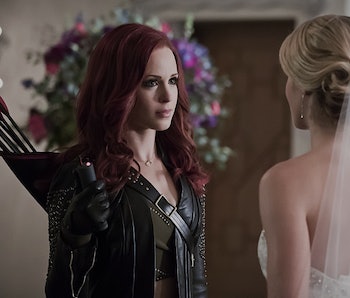 Remember that Arrow is a superhero show on the CW and not a gripping indie drama. This show is doomed to happy endings, so you can bet Arrow’s central paramours Felicity (Emily Bett Rickards) and Oliver (Stephen Amell), who are in a rough spot after the rescue of Oliver’s son, will probably get back together. Such is the nature of fan-pleasing primetime network shows.

But no matter what magic-hour drive into the sunset awaits “Olicity” — and we know Felicity survives even with the season teasing a mysterious death — at least there’s “Broken Hearts.” This week’s very excellent episode kept hope alive that maybe for once, something won’t ultimately break good for a superhero in her personal life in the end.

“Broken Hearts” re-summons Cupid (a returning Amy Gumenick), free from A.R.G.U.S. imprisonment after she’s completed her stint in Task Force X, the Arrowverse’s analog to the Suicide Squad. Now she’s targeting Star City’s tabloid newlyweds, forcing ex-fiancees Oliver and Felicity to forgo their complicated feelings for a mock wedding to snare Cupid and put her away for good.

Anyone could see a teary reunion coming a mile away. So Arrow doesn’t give us that. Cue fresh breath of air. Arrow does not give fans crying admissions of true love, but a quiet acceptance that Oliver and Felicity just can’t work things out. Is it because of who they are? Or what they’ve become? Either question is too painful to confront, so Felicity walks out — as the show competently waivew off her pivotal function as Overwatch, Team Arrow’s electronic eyes and ears over Star City.

“Olicity” has been, in a word, terrible. Any show that does the will-they-won’t-they romantic tug-o-war inevitably fumbles — remember Ross and Rachel the first time in Friends? — and it’s because fan expectations always dwarfs writers’ wills. The electric chemistry between Rickards and Amell in Season 1 was too good to ignore, so it’s no one’s fault that Arrow turned into a soap opera with superheroes. Of course, Arrow can be overly-plotted, and sometimes stupid. Felicity is the team’s tech wizard and Oliver is leader and expert survivalist, but so many times and especially this season they’ve been as dumb as Facebook comments.

Here’s Oliver’s logic: “I have an illegitimate son and I’m about to be married. I should totally hide this from my fiancee who would face virtually no more consequence if she knew because she’s already entangled in my vigilante crusade. Great idea! Also I’ll run for mayor.” [Takes off shirt, does a Ninja Warrior workout.]

Felicity isn’t any better. She’s a person who lectured her own mother about necessary secrets to protect the ones you love, but when Oliver revealed his son she just ups and leaves. Literally ups and leaves, just seconds after her paralysis was cured. This show, man.

But “Broken Hearts” is something else. Crazy absurd and probably inaccurate courtroom dramas aside (Daredevil is about lawyers and even that doesn’t get lawyers right), it’s a pretty tight episode of Arrow. It’s got flaws — like the action remains lazily choreographed — but this week was Arrow at its most engaging in recent memory. Though its core themes centered on irreparable relationships and being unable to have what you want, Arrow could actually win us back by giving us what we need: some damn good television.