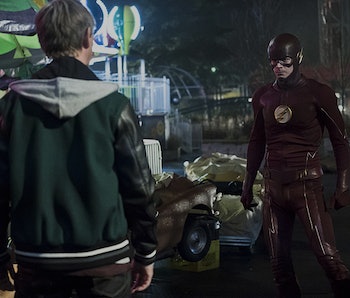 How do superheroes adjust after losing their superpowers? That’s a great question, and one that The Flash posed in Tuesday night’s episode “Back to Normal.” Unfortunately, the show doesn’t give a satisfying answer. Though still a well made and well-plotted episode, a speed-less Flash doesn’t take full advantage of Barry’s handicap, yet another example of this otherwise excellent show being afraid to put its hero through actual trouble.

After his encounter with Zoom (Teddy Sears), during which he surrendered his Speed Force, Barry Allen (Grant Gustin) is now regular old Barry, running at the same rate as the viewers at home. After the madness leading up to “Versus Zoom” the episode “Back to Normal” is a breather for the Scarlet Speedster, who has to rely on his other skills — he is still an observant boy genius — to save the day against a new meta-human threat, a vastly different Griffin Grey than DC Comics fans are familiar with.

In the comics, Griffin Grey was Bart Allen’s (the second Kid Flash) roommate and co-worker at Keystone Motors. Griffin was to Bart as Barney Stinson was to Ted Mosby: He was a suave, smooth talker who lived life to the fullest. After a disgruntled employee set off a bomb, Griffin was hospitalized and developed green lightning superpowers, and soon became a super villain named — well, he kept the name Griffin Grey.

And that’s not Grey at all in CW’s The Flash. Here, Griffin Grey (Haig Sutherland) is a high school senior when the accelerator explodes and gives him super strength. Unfortunately, anytime he exerts power his body ages. By the time he kidnaps Harrison Wells (Tom Cavanagh), or who he thinks is Wells, Griffin is in his late 40s, like a middle-aged man dressed out of his age in varsity jackets and hoodies. The poor kid wants nothing more than to be turned back to normal, even if he is acting irrationally and super criminal-y.

But that’s not the big shock of the episode. The real changer is way down in the C-plot, when a kidnapped Caitlin Snow (Danielle Panabaker) meets and strikes a deal with her Earth-2 doppelganger Killer Frost. Besides a neat visual and the novelty of two vastly different personalities played by the same actress, the plot comes to a grisly end when Zoom murders Killer Frost — he’s got the “real” Caitlin Snow now, no need for icy fakes. Implications that Zoom is a sex deviant are absent, but it is scary to think why he kept Killer Frost for however long it’s been. It’s gotta be months at this point.

(I’m also not worried The Flash is ridding itself of an important character like Killer Frost completely. There are hints in their conversation that Caitlin could one day become Killer Frost, too.)

“Back to Normal” isn’t a bad episode at all. It’s still rich with characters and the challenges Barry endures are troublesome. But Barry losing his Speed Force should feel like a devastating blow to the status quo, not a bump on the road like his paralysis was in “Gorilla Warfare.” It’s ludicrous that Harrison Wells wants to recreate the particle accelerator explosion: Is it a guarantee Barry will get his super speed again? What if it endangers even more people? They just saw a kid die because of his meta-human mutation. There’s blood on their hands and it seems reckless they want to do it again. I get it, S.T.A.R. Labs has no choice. I just wish they didn’t whiz by these questions.