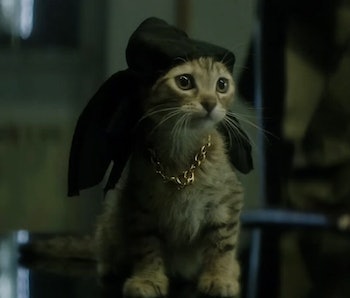 Comedians Keegan-Michael Key and Jordan Peele are in a lucky position. They’ve garnered such cultural clout with their popular Comedy Central TV series Key & Peele, which aired its finale in late 2015, that they’re headlining their own feature film comedy. But they decided not to go the autobiographical route that Amy Schumer did in Trainwreck. Instead, the duo has decided on a throwback.

Keanu exists in a genre that hasn’t been the most lucrative way for comedians to spend their studio feature film dollars for nearly two decades or more. It’s a high concept action comedy. Setting the film’s absurdly hilarious premise aside, the fact that it’s even in theaters at all means the movie is a product of a wave of lesser, more recent precedents which allowed it to become the pinnacle of a new era of big-screen comedies.

The action comedy sweet spot was in the 1980s and 1990s, hands down. Movies like Midnight Run, 48 Hrs., Lethal Weapon, Rush Hour, Bad Boys, and more were all successes which redefined the blend of movies with an action packed premise complemented by heightened comic relief. You have a plot that probably involves some sort of drug lord, a bunch of explosions, and a hefty amount of gunfire, someone like Eddie Murphy rattling off quip after quip to the camera, and voila: there’s your recipe for an action comedy.

The biggest success in the genre remains Men In Black, the 1997 Will Smith and Tommy Lee Jones smash that even technically occupied the subgenre of sci-fi comedy pioneered by similar classics like Ghostbusters. To date, the first MIB has racked up over $250 million in domestic grosses and still hasn’t been beat. Rush Hour 2, released in 2001 when the action comedy surge was waning, is at a sort of close second with over $226 million at the domestic box office.

But after the turn of the century, studio comedies didn’t so much devolve as much as they shifted into a looser, more exploratory, and straightforward comedic framework. Credit Judd Apatow, the singular and most influential voice in studio comedy, whose everyday schlub schtick soon took over the box office with movies like The 40 Year Old Virgin and Knocked Up. You have him to thank for people making comedies like Wedding Crashers and Dodgeball, because studios figured the weirder and more basic the better.

Without Apatow, we wouldn’t have Seth Rogen, who broke out because of those Apatow bromantic roles in order to make his own brand of new hilariously vulgar classics. Whereas Apatow was trying to emulate the normal guy comedies of the 1970s, Rogen’s newfound comedic influence caused him to attempt to ape the action comedies that influenced him while growing up in the 1980s. The stoner awesomeness of Pineapple Express — replete with a Huey Lewis theme song — and the Ghostbusters-esque This Is the End were movies that could have been around 30 years ago, if it wasn’t for their use of CGI.

Granted, there are a handful of other films that fit this throwback action comedy mold in between — Tropic Thunder and Hot Fuzz are particularly outrageous examples, with more recent entries like Kevin Hart’s Ride Along movies, the Jump Street meta comedies, and Paul Feig’s The Heat — but the path to Keanu runs through Rogen’s ability to take an individual’s box office appeal and comedic clout to make something new and interesting.

Key and Peele broke through with their popular show (thanks to endlessly quotable sketches like the infamous “Liam Neesons” series), and instead of figuring out a safe jump to the big-screen they decided to make a John Wick-esque action comedy about getting a stolen cat back from a bunch of drug dealers. It’s perhaps the best example yet of comedians taking the power granted to them and figuring out a way to subvert expectations in the funniest and most absurd way possible. If it’s a success — and it certainly should be — it’ll only give studios the wherewithal to give other genius comedic minds a shot at making their own Keanu.