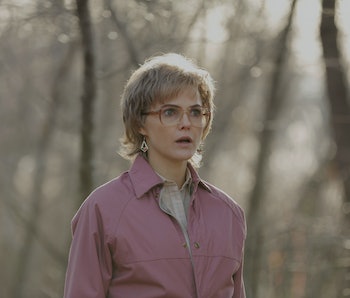 One has to love The Americans for always refusing to go the expected route with plot twists. In fact, Joe Weisberg’s show avoid twists, in the traditional dramatic sense, almost at all costs. Notably, the writers keep their characters alive as much as possible, rather than killing them whenever they get a spare moment.

Going into this season, the average Americans fan no doubt expected the focus of the show to revolve around the Paige (Holly Taylor) and Pastor Tim (Kelly AuCoin) problem, and that the blond-locked evangelist would be the Jennings’ next kill. Instead, that situation is more or less diffused, and the concern shifted to biological weapons, and the exfiltration of Martha (Alison Wright).

For the past two episodes, the source of tension has been the question of whether Alison Wright’s character was going to prove to be too much of a liability for the KGB. In this week’s episode — “Travel Agents” — Martha took Gabriel (Frank Langella), Philip (Matthew Rhys) and Elizabeth (Keri Russell) on a final roller coaster ride, leading up to just before the moment that will doubtless be the conclusion of her tense, heart-wrenching saga.

After Martha escapes from Gabriel’s house at the end of last week’s episode, Philip, Elizabeth and the Center’s agent launch into a citywide search for her. Meanwhile, the FBI’s research into the identity of “Clark Westerfeldt” confirms that no such person actually exists. Tracing phone calls, Stan (Noah Emmerich) and Aderholt (Brandon Dirden) place Martha in DC’s Rock Creek Park just as Philip and Elizabeth are running to intercept her. But ultimately, the moment of truth between Stan and the Jennings is avoided yet again, and Elizabeth (as “Jennifer”), with a punch in the stomach, brings Martha successfully back to Gabriel’s.

Martha works through sadness and thoughts of suicide in the episode, contemplating a jump from the park bridge, a contingency Stan and Aderholt also consider. As with the better part of the episodes in this season so far, one of the most remarkable parts of “Travel Agents” is Alison Wright’s ability to express Martha’s complex emotional trajectory. The fact that she never chastises Philip (or as he divulges to her in this episode, “Mischa”), but instead accepts her fate, and seems to be grateful that she ever had the companionship he provided, has been one of the more puzzling and moving aspects of this season. The writers allow to Martha and Philip a number of similar moments, building the tension and poignancy; it is like the messy denouement of a normal breakup, but with far more mystifying circumstances.

Another character undergoes a painful breakup with Martha, in his own quiet way, in this episode: Frank Gaad (Richard Thomas), who has been underutilized in this season so far. He is steeped in grief and weltschmerz following the revelation of Martha’s betrayal: angry at himself for never seeing it, grappling with a deep affection for her, and horrified by the KGB (“They seduced her and married her”). Looking wistfully out the window of Martha’s apartment — while Stan and Aderholt look on in bewilderment — he is a tragic figure. This job, and the losses it has brought him, has become too much to handle. Stan’s betrayal, clearly, is still weighing on him, as is the death of Gene (Luke Robertson), the innocent IT man who saved Martha’s neck. Perhaps it’s just the whole Reagan era.

Ultimately, though, everything on this show comes back to the mystery at its center: the relationship between Philip and Elizabeth. Elizabeth has been quietly grappling with Philip and Martha’s relationship — how real it has become — for the past two episodes, quietly assuring Philip that his other wife will be “okay,” while looking either dejected, ruthless, or a bit misty. When Elizabeth asks Philip whether she would flee to Moscow with Martha if he could, there is the sense that she is being accepting of the possibility out of genuine affection for him. Something in Keri Russell’s eye indicates, however, that he won’t. He vehemently denies it, of course, but waits tensely to see whether Martha will go to Russia willingly.

However, the question remains: Is Philip’s sorrow and guilt regarding Martha mostly a symptom of an overarching feeling that the work he is doing is immoral, or is it out of genuine love for her? Matthew Rhys plays the ambiguity perfectly, forcing us to never quite believe what he says out loud. The respective, unspoken sorrows of Philip, Elizabeth, and Gaad in this episode are cryptic and powerful — emblematic of what makes this show unlike any show on television.