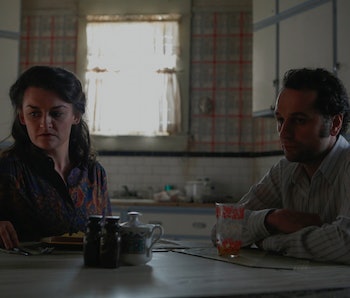 FX’s The Americans is able to build stakes like a top-notch thriller in part because it so expertly builds characters. And because it builds characters so well, it can, when it needs to be, manage to be deeply moving. The most heartbreaking moment on the show occurred tonight, or rather, several. This is because, naturally, it focused on Martha (Alison Wright), the show’s best secondary character, and one whose presence on-screen these days often threatens to elicit an emotional reaction.

The proverbial jig is up for Martha’s inside operation at work; Philip (Matthew Rhys) and Elizabeth (Keri Russell) have confirmed that Agent Aderholt (Brandon Dirden) is on Martha’s tail. Philip strong-arms Gabriel (Frank Langella), in a dramatic yelling match, into going along with his plan to exfiltrate her. Uninvited, Philip brings her to the Center’s hideout. But the viewer spends most of the episode wondering if Gabriel is going to use a moment away from Philip to kill her off, and deal with the consequences from Philip later.

Ultimately, the moment away — Philip has another biological-weapons-related rendezvous to fulfill with William (Dylan Baker) — becomes Martha’s opportunity to defy Clark and Gabriel’s orders and walk out of the safehouse. Martha’s secret weapon is not the gun she had in her purse (Philip takes that from her earlier in the episode) but the knowledge that they work for the KGB.

This information is revealed in a scene that will undoubtedly be one of the most poignant of the show. Philip tells her who he works for, explicitly, for the first time, and Martha — who seems to have prepared herself for even worse than this looks at him, sad but hopeful, and declares that nothing matters as long as [they’re] together.” It’s the ultimate statement of devotion, but of course, we realize they can’t possibly be. Philip and Martha sleep together in the only real sex scene w’e’e seen between them — and were left wondering how much of Philip wants to accept her offer to “run away together.”

The second best moment of the episode — continuing proof of what makes this show so unique — comes when which Philip reveals to Elizabeth that he revealed his identity to Martha months ago, and that he wants to stay the night with her, to help facilitate the exfiltration. It’s a stark counterpoint to the cold open of the episode, which finds Elizabeth and Philip cuddling in bed together, carefree to an extent we rarely see. When Philip tells Elizabeth the truth about Martha, Keri Russell proves how deeply she’s internalized this character, with flickers of shock, anger, and sadness. She swigs a full wine glass, and leaves hastily to make dinner for the kids, without voicing whatever she is feeling.

Beautifully cryptic moments like this are why it’s easy to fall in love with The Americans, and what continues to make it engaging. This season is only getting better — capitalizing gradually on its strengths and playing on our deepest fears, winning our trust all over again after an uncertain beginning.