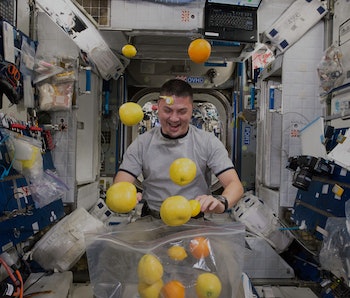 Astronauts are better than the rest of us. There’s no objective way to prove that outright, but it’s still true. We know this in our dense, Earth-bound bones. Being an astronaut, after all, is tough, and only getting tougher as we set our sights for Mars and beyond. NASA and ESA employ both seasoned veterans and an increasing number of rookies like Kjell Lindgren, who have to be calm under the pressure (or lack thereof) of life in orbit.

Lindgren’s first mission to the International Space Station — where he lived and worked alongside others like Scott Kelly and Mikhail Kornienko — started in June 2015 and lasted five months, which means he hasn’t totally readjusted yet. And that can be said of both his being back on Earth and his being able to introduce himself as an astronaut. It’s a surprising turn anyway. He began his career in medicine and biology, then found himself growing and eating lettuce in space and venturing out on spacewalks for a total of 15 hours.

Lindgren is in Washington, D.C. this week to speak to the space-loving public about his mission, the future of space travel, and to inspire some young people to think about making “astronaut” a career goal. He took some time out of his schedule to speak with Inverse and tell us more.

So, how did you become an astronaut? What were your experiences in life that led to this amazing journey?

I’ve loved space for as long as I can remember. I think I was inspired by the fact that I grew up in an Air Force family, so I was constantly surrounded by planes and pilots. I read a lot when I was younger — science fiction in particular — but the biography of Chuck Yeager, early astronaut stories, and accounts of our early space program inspired me to pursue this dream. It’s something I always kept in the back of my mind as I grew older. I think I also realized how difficult it was to make this particular dream come true. So following the advice of astronauts I had the opportunity to meet, I just really pursued careers that I had an interest in, that I had a passion for, that I felt like I had a talent for.

Ultimately that led me to medicine. I trained in emergency medicine, but still had a desire to be a part of human space flight. So I went on to study aerospace medicine and got a job as a flight surgeon at NASA’s Johnson Space Center, taking care of the astronauts. Then ultimately I had the great fortune to get selected [for astronaut training] in 2009 during that application cycle.

This was your first time time in space. What were the most surprising things you had to get adjusted to during your first few days or weeks?

Our training folks do a tremendous job of preparing us for the rigors of our mission — whether it’s training on the systems of the space station, training for launch on landing, using a robotic arm to doing a space lock. There’s nothing I was really surprised by or I felt I wasn’t prepared for.

That being said, there’s nothing that can really prepare you for living and working in weightlessness. That’s really OJT [on-the-job-training]. It takes a while to get used to it — to be efficient, to learn where everything is on the space station, how to organize your tools and equipment so you’re not constantly losing things, and how to traverse around the space station without constantly knocking things off the wall. Those are all challenging things and I think most of us would say that at about six weeks, a month to a month and a half, you feel like you’re operating on all cylinders.

Weightlessness is incredibly fun. I mean it’s great to be able to float around, but it’s also a two-edged sword. Keeping stuff organized and everything seems like it’s a little bit more challenging when you’re working in orbit.

Can you tell me about the various experiments you helped work on? Which studies did you think were the most interesting, compelling, or strange?

I did enjoy life science research, since that’s my area of interest and background. I enjoyed using all of our medical tools and diagnostic tools to do the studies where we served as subjects. But I also really enjoyed a lot of the material science and other activities. For example, there’s an experiment called capillary beverage. We filmed ourselves drinking from a special zero-g cup and so it meant we got to enjoy beverages and coffee while we were doing science. But the really interesting psychics behind it is how to use geometry and materials to move fluids in space without having to use power or pumps. This has a significant impact on the future design of fuel tanks, for example.

Another one of my favorites was the veggie experiment. We had the opportunity to grow lettuce up there. Again, it was fun to grow a crop and to eat it. But that has implications of future missions and how we might supply astronauts on deep space missions with food so that they don’t have to carry all their food with them. They can actually grow some of their crop and have fresh food as part of their diets. That of course has implications for logistics and supply for future missions. There’s also a psychological benefit. We garden because it’s fun to take care of these living, growing plants. This living, growing, green thing in this otherwise sterile and white and aluminum environment.

I wanted to ask about your EVA [extravehicular activity, aka spacewalk]. Can you tell me what that was like? Were you nervous? Confident?

Well the spacewalk is probably one of the most dangerous things that we do on an expedition. I think there’s definitely a little bit of nervousness associated with it. For Scott and I, when we went out the door for the first time we were both rookies. Neither of us had done an EVA before. But we spent a lot of time training on the ground. We spent hundreds of hours in the neutral buoyancy tank. It’s a six million gallon hole in the Johnson Space Center. We have a mockup of the space station so that we can learn how to use the space suit, how to use the equipment, and how move around in the space station. By the time we’re preparing to go outside, there is some nervousness, but I think we’re confident in our abilities. I think that was reflected in the accomplishment of our tasks.

A spacewalk is an absolutely amazing experience and one that I am incredibly grateful for, and we had the opportunity to do two. It’s also probably the most challenging thing I’ve done physically or mentally. There’s a great sense of accomplishment and satisfaction when you’ve conducted those space walks safely and successfully.

I have to ask — before you left to come back home you played the bagpipes aboard the ISS. Please tell me how you thought of doing that, and also, are there bagpipes in space or did you have to request to bring those up there?

Previous astronauts have had the opportunity to play instruments in space: the guitar, the keyboard, the harmonica. I grew up spending a great deal of my childhood in England and fell in love with the bagpipes while I was growing up there. It’s something that I wanted to learn how to play for a long time. So getting to play the bagpipes on the space station presented a unique opportunity. We all have a small allotment of personal items that we’re allowed to bring up to the space station. As long as they’re safe to fly, that can be stuffed animals for kids, clothing, food, favorite books, etc. So for myself I elected to utilize that volume and weight to bring up a set of bagpipes. My plan was to actually play “Amazing Grace” for Veterans Day, but unfortunately a good friend of mine passed away while I was on the space station, so playing “Amazing Grace” is a comfort and an encouragement to his family and friends. That was an opportunity that presented itself and I’m hopeful that it was a comfort to his friends back here on Earth.

How would you evaluate the ISS right now? Is it doing well, or did your time up there expose you to some issues countries here on the ground will need to address?

The space station is actually in great shape. We’ve had pieces of the station in space since the late ‘90s and we’ve been living on the space station. We’ve had a constant, continuous human presence for over 15 years. I can’t say there’s any really big thing in my mind that needs significant improvement.

I think we need to, as we work towards our future plans, make sure that it is capable of sustaining a slightly larger crew as our commercial vehicles come online, and maybe develop plans for having a crew of seven at some point. We need to make sure the environmental control systems are capable of sustaining a crew of that size. I think all of us are hopeful that the lessons we learned from the space station, the science that we do, serves it purpose as we prepare for our journey to Mars, and also utilize that knowledge to improve life back here on Earth.

What’s next for you? Are you aiming to go back up into space once again?

Well for the short term right now, I’m still in my post-flight period. I’m spending a lot of time traveling and really sharing my experiences and the results of the time that I spent on the space station. After I’m done with my post-flight I’ll be working in the astronaut offices to support the folks that are flying now and training to fly, to make sure that they get the most out of their missions as well.

I’d love to fly again, and I think a future mission would be very similar to this one. We would continue to leverage [the ISS] — this miracle of modern engineering — to improve life here on Earth and to build that bridge to Mars. It’s possible that if I were to fly again that I’d get to fly maybe on a commercial crew vehicle. So I think the opportunity to be a part of that, to launch in U.S. soil from Kennedy Space Center on a U.S. flagged ship, that would be a remarkable opportunity.

I would love to continue to be a part of the space program as long as I feel like I’m contributing, I’m actively adding value to what we’re doing here at NASA. As long as it continues to be a challenge and as long as we’re benefiting the investigators that have entrusted us with their science, and also continuing to push for and explore bigger things. I want to be a part of that. It’s an amazing place to work, it’s an amazing team to be a part of, so I’m very excited to be here.