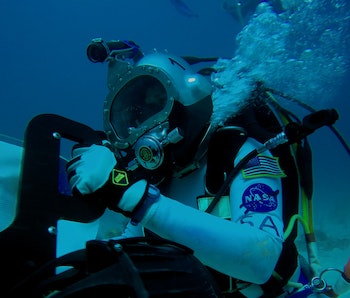 When it comes to designing spacecraft and preparing astronauts for life in zero gravity, the ocean is the best testing environment on this side of the stratosphere. One of the most useful similarities between the deep sea and deep space is modified gravity. Gravity doesn’t decrease underwater, but buoyancy counteracts it, allowing humans to become accustomed to new types of movement and unexpected strains. Also, there’s the pressure, which is highly variable and the size of the lodgings, which isn’t. It’s tight quarters underwater, which is why #submersiblelife is so relevant to space agencies curious about the long-term effects of confinement.

“All these tests inform what the design of spacecraft and other equipment needs to be,” says Bill Todd, the aquanaut commander of the first NASA Extreme Environment Mission Operations (NEEMO) to the Aquarius underwater laboratory off Florida’s coast.

According to Todd, the biggest lessons spacecraft engineers can take from underwater vehicles pertain to life-support systems. In both instances, carbon dioxide scrubbing is critical, there has to be food on hand, and waste management is an issue. These abstractions manifest as physical similarities: Engineers design underwater and space systems with similar wiring and electrical efficiencies to withstand shifting conditions.

Still, in all cases, the goal is to maintain a stable, supportive interior at roughly one atmosphere of pressure. This is probably the biggest issue vehicle designers have to contend with. “The unifying element is people,” says Bowen. “Astronauts require more or less the same environment than an aquanaut does.”

One of the big objectives from the NEEMO missions is to help test out and improve life support systems one would use in space. These aren’t just the ones that help control room temperature and humidity and deliver breathable air to an isolated habitat — they also include personal systems an astronaut would wear or carry while they are outside a sustainable habitat.

There are serious consequences to decisions made underwater. And that seriousness — as well as the stress that accompanies it — is a critical ingredient to field testing not just equipment, but human beings.

NEEMO missions work by setting up a small crew with a commander and two professional aquanauts, and tasking them with various kinds of research projects. The procedures and “flight plan” are very similar to those used in space travel. The activities are all designed to expose participants to the rigors of spaceflight, minus the g-forces on liftoff.

Spacecraft and submarines aren’t dissimilar in shape, either. Both often use a cylindrical or spherical hull that helps the craft better navigate through their respective environments. “Round shapes tend to have lower drag profiles,” says Andy Bowen, a submersibles engineer at Woods Hole Oceanographic Institution, making it easier for an underwater craft to move through water or a spacecraft to make it in out of Earth’s atmosphere.

Movement is another common element between the two crafts. Underwater craft are often designed with thrust mechanisms that allow the craft to move in all directions. Spacecraft maneuver in almost an identical fashion in space. Currents in water simulate gravity near planets, moons, and other celestial objects.

Still, there are limitations to how much astronauts and spacecraft engineers can learn underwater; the two environments are, after all, fundamentally different. “Spacecraft deal with extreme temperature changes, from extreme heat to extreme cold,” says Todd. “They typically need to be lightweight and compact. Undersea is radically different. You want to be heavy — not light — to withstand incredible pressure changes, especially as you go deeper and deeper.” That’s why the hulls of spacecraft are mostly aluminum, while underwater craft usually use high-pressure steel.

Fundamentally, NASA traffics in deprivation and difficulty and, to that end, seeks out the most outrageous inconveniences our planet has to offer. For now, the ocean provides a steady drip of difficulties, but future expeditions may require underground analog missions, or lava missions, or ice missions. Simulation needs to be a fundamental part of the pre-launch process. We can’t prepare astronauts for what we don’t know about, but we can help them prepare themselves to deal with the unknown.