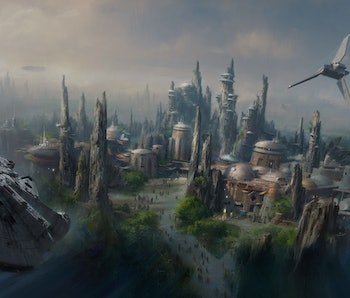 Walt Disney Parks held a summer preview event called Awaken Summer last week, at which journalists got a chance to look at the new innovations coming to many of the company’s parks around the world. Among the many comings and goings highlighted, the biggest revelation was a brand new update about the previously announced Star Wars theme park in California, which is now being called the Star Wars Experience.”

The new concept art, by Walt Disney Imagineer Greg Pro, is different from the previously released images of the park so far. It makes sense, since construction has already begun on the park for the planned opening in a few year’s time, so they have a better idea of how this thing is going to pan out and fit within the expanded 14-acre space of the park.

The rendering gives a better sense of the previously announced attractions, including a Millennium Falcon ride, a Resistance vs. First Order interactive experience, a street market where you’ll inevitably be able to buy as much Star Wars merchandise as humanly possible, a cantina and a restaurant where you can (hopefully) drink to forget how much money you spent on going to the park, and a few more surprises the head honchos at Disney have yet to announce.

Take a look at the art below:

While its still a fairly vague image, the art shows the best layout of the entire park we’ve seen yet. We actually know the geography of the Star Wars Experience now or at least what’s being planned at the moment. There’s the Millennium Falcon ride right at the top, while the marketplace that will most likely house the cantina and restaurant are scattered across the middle section, and we’ll just say the Resistance ride is probably the section in the northwest portion of the park.

This assertion is backed up by Disney fansite MiceAge, who has an interesting look at how the Star Wars land will fit within the layout of the bigger park based on the map of Disneyland.

They also mention something in the west end of the park called “Battle Escape Queue and X-Wings,” which seems to be where you’ll line up to go on a ride, plus maybe get a photo-op, with some life-size Resistance spaceships.

But what are the vaguely Empire-esque structures to the east? MiceAge lists it as “Preshow & Queue,” which means it might be some sort of video welcoming visitors to the park, but it’d be great if it was some kind of recreation of a star destroyer bridge or First Order command center. Who knows, maybe if you go there you could get a surprise visit from Darth Vader and his grandson, Kylo Ren?

The Star Wars Experience is currently under construction, while the next film, Rogue One, drops on December 16, 2016 with Rian Johnson’s Episode VIII scheduled for release on December 15, 2017.