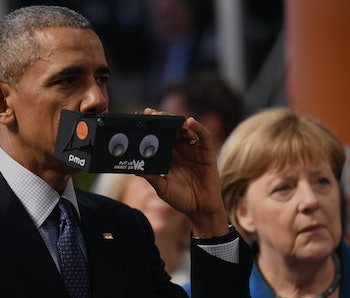 President Barack Obama tried his first augmented/virtual headset on Sunday while touring a technology trade show in Hannover, Germany, along with German Chancellor Angela Merkel. The PMD device’s Google Cardboard-like exterior equips with a Samsung Galaxy S7 and an external 3D camera to provide both digital immersion and reality alteration.

Obama seems to have particularly enjoyed the augmented reality features of the goggles: he spent a good while ogling his own hand through the camera, experiencing a program that identifies individual fingers and marks them with color highlights. In fact, he enjoyed the simulation so much that when Merkel tried on the goggles, he grabbed her hand to raise it into view.

It’s a little surprising that the president is only now experiencing virtual and augmented reality goggles for the first time. Obama has long heralded American innovation and investment in technology as a key to a rejuvenated economy, but after two prototypes and the first commercially available headset released just last month, he still hasn’t even tried an Oculus Rift?

Now, we know why Obama enjoys the White House science fair so much every year: He thinks that the elementary schoolers who attend are developing the most advanced tech we have. Well, Mr. President, welcome to the future.

Obama enjoyed his time with the goggles so much, we were a little worried he would forget to give his hostess, Chancellor Merkel, a try with his cool new toy. Luckily, Obama remembered his diplomatic training and passed the goggles over to the leader of the close American ally, even if he did get a little weird about it:

It may be strange that Obama’s first experience of VR/AR came at a German industrial technology trade show, but the Hannover event is not only the world’s largest gathering of the kind, it was the United States’ year to host the event. Nonetheless, the headset Obama and Merkel used was made in Germany. Quite a shame, Mr. President. We expected better from you.

More like this
Gaming
8.3.2022 6:00 PM
We Met In Virtual Reality offers a hopeful but flawed vision of the metaverse
By Willa Rowe
Innovation
8.9.2022 11:00 AM
This self-healing material could fix your dinged-up car in 30 minutes
By Molly Glick
Innovation
8.8.2022 10:00 AM
A wild new plane-train hybrid could whoosh you to your destination — if it can get off the ground
By Molly Glick
Related Tags
Share: