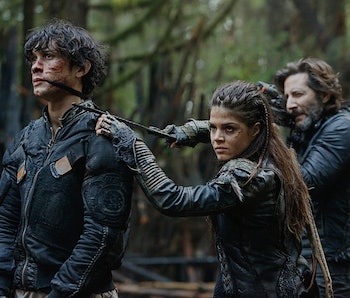 When The 100 premiered on The CW three seasons ago, it felt very much like a drama for teenagers. This wasn’t entirely surprising — it is, after all, based on a series of young adult novels, and it’s on The CW, which isn’t exactly a network famous for prestige dramas.

By Season 2, though, The 100 set out to prove that it wasn’t just a teen show. It got darker, more complex, more inclusive and became more of a sprawling sci-fi epic akin to Battlestar Galactica or Deep Space Nine. Now, in Season 3, The 100 has arguably gone too far into the dark and its inclusivity has taken a shot (or three), but it’s impossible to argue that The 100 isn’t still shaking off the teen drama label any way it knows how.

Analyzing the show’s soundtracks yields evidence of that pattern.

The first season of The 100 was soundtracked largely by pop jams and notable contributions by Imagine Dragons, Ben Howard, Youngblood Hawke and Disclosure with some trendy #indiecred additions like Volcano Choir and The Antlers. They were ultra recognizable tracks, but they often felt incongruous and heavy-handed.

For the most part, the songs didn’t fit the scenes well, and often dragged them back into vapid teenage love story territory — when the show was so desperately trying to establish itself as serious sci-fi. The music that serves as background for a scene can dramatically impact our reading of the scene, and it was to The 100’s detriment in Season 1 that the songs said “teen show” while the dialogue, action and arcs were trying to say something entirely different.

Beyond that, it felt fundamentally bizarre that a show taking place well over a hundred years in the future was soundtracked by Imagine Dragons. If we’re being honest, I really hope that no one is still listening to Imagine Dragons after the inevitable nuclear apocalypse. Some things just aren’t meant to survive.

In Season 2, The 100’s sonic signature would grow up as the show introduced new characters, explored Grounder culture, and delved deeper into issues of morality, humanity, innocence and war. There were still instances of contemporary music with frequent appearances by Raign, but much more of the soundtrack came from recordings of classical music and original compositions for the show by Evan Frankfort. There was even an in-world (and super creepy) appearance of “Carol of the Bells.”

Overall, it was a much better tonal fit. Raign isn’t a super popular artist, and it was unlikely that the masses were going to have a strong reaction at first listen because, well, they probably wouldn’t know who she was. The classical music lent a sort of timelessness to the scenes, which made sense in context. They’re not songs of our time, but ones that feel deeply woven into the tapestry of human existence. It stands to reason that they’d still carry weight in a hundred and fifty years or so, where most pop music very well may not.

Things got really interesting at the end of the second season, though, when music took a turn for the diegetic. When Murphy finds the bunker near Alie’s mansion in the finale, he enters to “Werewolves of London” blasting from the bunker’s sound system. The choice was clever and bizarre, but more importantly, it had us thinking more and what pieces of our pop culture survived the apocalypse. Clearly “Werewolves of London” made it, along with whatever else the owner of the bunker was keeping stored away in digital and analog files.

Season 3 would bring an even more significant change with the addition of a score by Tree Adams (Dawn of the Dead, Californication) and decisions to use familiar or popular music in the world of the show rather than as a part of the soundtrack.

In the premiere, we hear “Add It Up” by Violent Femmes not once but twice in the world of the characters: once as a odd, somewhat out-of-character scene for The 100 with Raven, Octavia, Jasper, Miller, Monty and Bellamy singing along to it in the rover on the way to follow a lead, and again at the end of the episode from guest star Shawn Mendes (who, okay, is a teen star, but this is still a CW Show and it’s a Violent Femmes cover so we’re going to let it slide).

In later episodes, we hear diegetic music at Mount Weather and in Raven’s compartment when she tries to block out Alie by way of sensory overload. Perhaps one of the most striking uses of music, though, was the Grounder Anthem used in “Ye Who Enter Here,” written by Adams in a joint effort with the writers (as it’s in Trigedasleng, the Grounder language in the show) and performed by Julia Dominczak.

Season 3 has been by far the most cohesive in terms of music choice. The songs used in the show finally reflect that The 100 considers itself serious sci-fi and it wants the world to see it that way, too. Gone are Imagine Dragons and Ben Howard, replaced by a stirring score, carefully considered diegetic music choices and original songs that exist to elevate the show’s mythology.

The 100 isn’t just a teen show, and its music finally reflects that identity.