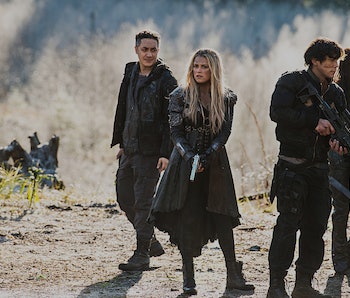 This week on The 100, we have a good old-fashioned ghost story, replete with a homicidal maniac hiding in the shadows, friends disappearing one by one, and even some wonderfully Blair Witch-y night-vision.

In fact, if you took the episode of Boy Meets World in which the ghost-faced Scream-esque killer is on the loose in John Adams High and put it in a post-apocalyptic landscape that’s been ravaged by death and haunting decisions, you get pretty damn close to Episode 12 of The 100’s third season, titled “Demons.”

It all starts when Miller (Jarod Joseph) tells a ghost story about a man haunted by his dead family who was driven to kill 11 people in one night by “demons.” Then, because this is a ghost story, Miller, Bryan (Jonathan Whitesell) and Harper (Chelsey Reist) find themselves kidnapped by someone in Grounder garb. And so, in fair Arkadia we set our stage.

Clarke (Eliza Taylor) & co. ride into Arkadia and find a ghost town. They discuss the finer points of A.I.’s, gene therapy, and what happens when somebody’s body dies but their consciousness has been uploaded to the City of Light. Monty is (Christopher Larkin) hopeful that his mom might still be alive after he had to make the tough choice to kill her last week.

“That depends on your definition of alive.”

In Polis, Ontaris (Rhiannon Fish) playing Commander when Murphy (Richard Harmon) happens upon Emori (Luisa D’Oliveira). She’s been trying to find him, which is practically a proposal by Emori standards. She doesn’t go out of her way too much. Murphy confides in her that Ontari’s not really the Commander — not officially, anyway.

Meanwhile, the Scooby Gang pokes around Arkadia. Inside the gates, they split up to gather gear and supplies. Naturally, things go south. Splitting up is rookie mistake #1.

They’re in pairs and are all but nabbed two-by-two until Sinclair’s (Alessandro Juliani) dead and everyone but Bellamy (Bob Morley) and Clarke are being held by their captor, who we find out is Emerson (Toby Levins) when Clarke plays opossum during his attempt to gas them out and rips off his mask, revealing his identity.

Emerson’s endgame? Killing Clarke after she watches her friends die. Clarke doesn’t go down without a fight, though. She shoves the Flame into Emerson’s neck, which promptly kills him.

Reunited, the gang send Lincoln (Ricky Whittle) and Sinclair out the traditional Grounder way: with fire. It’s a sobering and touching scene as we realize that this is what the original 100 have become. They bid farewell with words that are all too familiar: “Yu gonplei ste odon.” Octavia (Marie Avgeropoulos) has had a tough time coping with the loss of Lincoln, but has pushed it aside as the gang fights yet another war.

In Polis, though, things are getting worse: Ontari’s taken a City of Light chip from Jaha (Isaiah Washington) and we end the episode with Ontari next to the throne while Alie (Erica Cerra) sits upon it, the de facto Commander.

At its core, “Demons” was damn clever. The use of the slasher film structure was riveting, and it was a brilliant mechanism to set up the action in the episode. As a standalone episode, it was almost definitely the best since the very beginning of the season.

That said, the arc is still worrying. Sinclair’s gone now, too. And for what? Just because anyone can die? We’ve said it before, but the continued deaths of favorite characters is just getting disheartening now. Beyond that, Bellamy seems to be getting off mostly scot-free. Say what you will about his guilt, but when Clarke’s been questioned and tortured for her decisions ad nauseam and Bellamy struts off with nothing more than a pissed-off sister and some self-doubt, something’s wrong.

Granted, there’s still time to complete this Bellamy arc. There’s a lot going on and a lot to achieve in these episodes as we’re on a collision course for the season finale. But trying to redeem Bellamy with nothing more than the struggle we’ve already seen him go through is a disservice to these characters, to his characters and to the audience.

His narrative has felt rushed, frantic, and inconsistent all season. We need a more satisfying conclusion before we even consider some kind of redemption. The Bellamy Blake we’ve seen for most of the season is not a hero and we’re not about to believe the shows attempt turn him back into one. Not yet.

Overall, though, “Demons” was a triumph in its use of classic horror storytelling devices. It was an episode that reminded us The 100 is still capable of executing new ideas, even when its larger arc has been hog-tied by puzzling and disturbing choices in the treatment of characters. With any luck, The 100 will find itself doing more inventive storytelling and less seemingly useless killing as we move towards the end of this season and into the next.