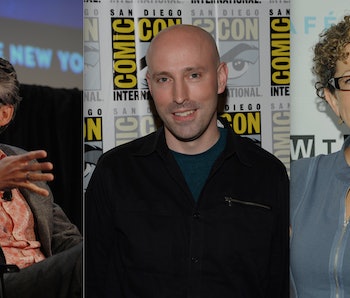 Marvel has a Cinematic Universe, DC is trying to kickstart its own interconnected series, and Star Wars is molding its slate of stories into a big-screen universe too. So why can’t Hasbro have its own intertwined cinematic stories that make billions of dollars? Good news! The Hollywood Reporter has detailed the toy brand’s plans of making connected movies out of its G.I. Joe, Micronauts, Visionaries, M.A.S.K. (Mobile Armored Strike Kommand) and ROM properties.

Unless you were a kid in the 1980s, you were probably unaware of a few of these titles, but the property line-up isn’t the interesting part of the news. Hasbro has used the cinematic universe as a pretense to put together a creative brain trust of some fairly heavy hitters, almost like a screenwriting version of the Murderer’s Row of the 1927 Yankees. So who are Hasbro’s Lou Gehrig, Babe Ruth, and more?

The Amazing Adventures of Kavalier & Clay author and Spider-Man 2 screenwriter Michael Chabon, Y: The Last Man, Paper Girls, We Stand On Guard and Saga creator Brian K. Vaughan, and Guardians of the Galaxy and Captain Marvel co-writer Nicole Perlman will lead the team that will create the interconnected films and characters.

Per THR, the rest of the team includes:

“Lindsey Beer, who was just hired to adapt Kingkiller Chronicle for Lionsgate

Joe Robert Cole (a writer on People vs. OJ Simpson who is also writing Black Panther for Marvel)

Jeff Pinkner, who wrote the adaptation of Stephen King’s The Dark Tower)

Geneva Robertson (one of the writers of new Tomb Raider movie project).”

Acting as a kind of consigliere will be Academy Award winning screenwriter Akiva Goldsman, who was already tasked with trying to wrangle together Hasbro’s Transformers series in order to create a uniform domain for the subsequent sequels of that franchise to compliment one another. Goldsman will executive produce all of the new films created by the new writer’s room group.

The part of this announcement which really stands out is just how diverse and fine-tuned the collective is. These are people who are well aware of how to tell overarching stories in multiple mediums, and it makes Hasbro’s choice of hiring a bunch of people at once instead of developing these stories gradually appear a little less insane.

There’s no word on whether Hasbro will continue the G.I. Joe cinematic storyline from 2009’s The Rise of Cobra or 2013’s Retaliation, but we’re fairly certain fans won’t mind a reboot. As for the other IPs, this has to be a Micronaut and ROM fan’s greatest day ever.