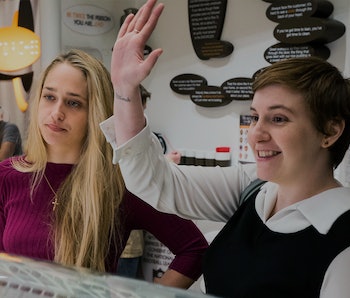 It’s always been way too easy to hate HBO’s Girls. Since it premiered in 2012, its been an especially contentious subject for New Yorkers, for whom it either hits too close to home, or scans as ludicrously classist/racist. Much of the audience fails to acknowledge that the show is outlandish fiction, and meant — at least, in part — to be disseminated by the world outside the five boroughs.

But Girls instantly struck some sort of chord, even beyond the Big Apple, perhaps mostly for its openness about sexuality and willfully messy, spontaneous style. Before any of us knew it — hate-watchers and die-hard Dunham acolytes alike — it had arrived at season 5. The show has grated over the years, mostly because of a certain refusal to stick to particular plot lines, and plot twists that seem thrown in for shock value rather than logical character development.

This season, things took a different turn: for the offensive. Girls Season 5 was full of head-scratching and off-putting gestures — many more than normal. Did Dunham think we had stopped watching, or rather, that this would cause people to pay real attention? What felt even stranger: the amount of people who were totally on-board. Here’s a roundup of some of the more perplexing turns.

The Marnie and Charlie reunion

In Episode 6, Marnie (Allison Williams) runs into Charlie (Christopher Abbott) — who left the show after Season 2 — on a particularly run-down-looking alley in Bushwick, Brooklyn (where the price of renting an apartment for a year now threatens to exceed that of liberal-arts college education). He’s with a well-tatted group of men (some Hispanic) who act subtly sexually threatening toward Marnie. Charlie himself has gotten more rugged — also, a drug dealer — and looks a lot like Shia LaBoeuf in his recent tough-guy mode. They hook up, since Marnie is having problems with Desi, and Marnie is about to run away with him until she finds a heroin needle in his pants. Cut to Marnie running away from this dirty neighborhood, and never looking back. The inclination: not to help a former dearly-beloved one, but to essentially go, “Ew! Heroin” and run away. The episode ends by lackadaisically and borderline-irresponsibly grazing on a very real epidemic (in NYC and beyond), and manages to reinforce a few beyond-unfortunate stereotypes along the way.

Shoshana (Zosia Mamet) has a love-hate relationship with Japan, and gradually she reveals how isolated she feels there, through a gradual “other”-ing of Japanese culture. The sympathy we are supposed to feel here — at least the guilty “I can relate” — is pretty off-putting, as we rarely go beneath the surface with any of the Japanese cast, even Shoshana’s erstwhile boyfriend. Guest star Aidy Bryant’s joke that Tokyo is like the “inside of Katy Perry’s vagina” is mostly confusing. Is a “stupid American” angle really the intentions, or another instance of the “WTF, Japan, am I right?” impression that runs through this whole storyline? As with many things on this show, it may well be intended as the former, but the ultimate effect is the opposite.

Something about this whole episode, which is supposed to be a goofball exploration of Sleep No More-like theater, feels odd. The Genovese murder, and the sociocultural issues it brings up, feels like a weird frame of reference in this episode. Is Dunham trying to use elements of the case to reflect back on the characters? Is the “bystander effect” something that has infected the characters’ view of the world? Or was the whole concept a black-humorous excuse to use Mad Men-like sets and music? In any case, something here really doesn’t sit right: using Kitty Genovese as some sort of empty, obscure metaphor, or even solely as an object of absurdity.

Cartoonishly played up in the finale, the amour fou interaction between Adam (Adam Driver) and Jessa (Jemima Kirke), which involves breaking down doors, hitting each other, and trashing everything in sight. The context for the big fight? Jessa values “friends” (read: Hannah) over Adam, at least intellectually, and is angered by her feelings for him. In the realm of jumping from 1 to 11 to supposedly prove points about characters, the onslaught is the most unjustified of anything in the season — the culmination of a sparsely realized, shock-value-tinged plotline. Functionally, it doesn’t serve to show “Relationships can be complicated,” as much as to promote commentary to the tune of “Look at these two crazies.” What do we really glean from seeing these two together, throwing each other around, and masturbating next to each other?

All this without even trying to unpack the nonconsensual sex which made headlines.

The issue is not that the characters on Girls aren’t likable; that’s never been the point. The problem arises when the show seems to be wholly out of touch, and fails to meaningfully present the oblique shifts in characters that the show really digs its grave. It’s easy, watching Hannah giving Ray head in the coffee truck out of nowhere, for Girls to feel a bit soulless, and truly disconnected from human experience. When it feels both empty and insensitive — combined with the high quotient of #whitepeopleproblems that runs back to front through the series — well, it’s a truly lethal combination. Let’s hope that we can get back to slightly more even ground in Season 6.