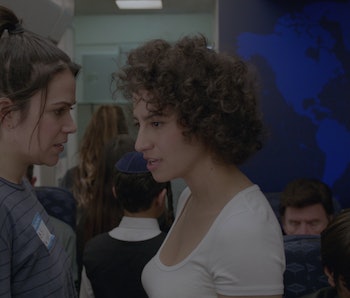 Last week’s Broad City left off with Abbi (Abbi Jacobson) and Ilana (Ilana Glazer) barely making it on the flight to Israel for their Birthright trip. The third season finale appropriately digs out the hilarious potential of these free heritage trips. As the playful in-flight safety video featuring a blonde Adam Levine plays for the enthusiastic crowd of young jews, Abbi and Ilana scheme to switch seats with other members on the plane so they can sit next to each other. Once they end up in the same row only separated by a man in a heavy slumber (who we later find out is dead) the episode continues forward with chaotic hilarity.

Abbi gets her period, but her tampons are in the carry on bag she had to check. Abbi goes looking for a tampon, while Ilana embarks on a mission to accomplish her dream of joining the mohel chai club (mohel: a jew trained in circumcision; chai: “life” in Hebrew; together pronounced “moil-high”), which means she wants to fellate someone in the bathroom. As Ilana peruses the plane for the right peen to clean, she also collects items for a makeshift tampon for Abbi: a piece of pita bread, a yamaka, and a hair tie. When Abbi refuses to use Ilana’s contraption, they set their sights on a box of tampons in first class.

Abbi breaks out into a rendition of “Hark! The Herald Angels Sing” as a diversion so that Ilana can charge first class and snag a tampon for Abbi, but their efforts are thwarted when the flight attendants, who think Abbi and Ilana are scheming a terrorist attack, tackle them both to the ground. They’re questioned by Israeli forces when they land in Israel, and are sent back on a plane to New York when their stories don’t add up.

While there is some drama that remains unresolved at the end of the third season—namely the future of Abbi’s and Trey’s relationship—the Season 3 finale finds the two best friends getting into some of their most absurd antics yet, all the while poking hysterical fun at their Jewish heritage. “Jews on a Plane” combines shrewd jabs at Judaism with general plane humor to create one of the funniest episodes of the season.

The Birthmark trip advisor (Seth Green) assigns seating on the flight based on marriage eligibility, and Ilana later finds out that he actually makes commission from every engagement that comes of his matchmaking, like a modern Yente from Fiddler on the Roof, but with financial benefits. Several of the young adults on the flight are looking for a mate who also went to an Ivy League school or with whom they can rapidly procreate, with the exception of the flamboyantly gay boy who needs to get married so he can access his trust fund. While the money-grubbing and Jewish purity stereotypes have been done to death, the Birthmark trip as the background of these jokes is a new and hilarious setting for these jokes.

The mohel chai club spiel is a brilliant and vulgar joke that lampoons the mysticism surrounding many Jewish traditions, and how the true meanings of these traditions are often skewed by younger people who were born Jewish but don’t practice. Ilana tells Abbi that the mohel’s job at a briss (the circumcision event) is to fellate the infant to stop the bleeding after he has removed the foreskin, which is how Ilana pieces together her definition of the mohel chai club: fellating someone—albeit not a baby—in the airplane lavatory, rather than the normal “peena vageena” outlined in the mile high club.

Ilana isn’t the only one looking to perform fellatio on the plane: Broad City suggests that in-flight turbulence is caused by the pilot’s lack of attention to the skyways while his copilot is servicing him. “Why do you think it’s called the cockpit?” Ilana asks Abbi. Continuing with general plane comedy, “Jews on a Plane” depicts flight attendants as sad lowlives trying to add glory to their lackluster jobs. The best friend flight attendants who thwart Ilana’s and Abbi’s tampon scheme only carry out their plan so that one of them has a bold story to tell her classmates at a high school reunion. The Romy and Michele storyline here suggests that flight attendants are merely waiting for their moments of vindication, handing out drinks and exorbitantly-priced snacks to pass the time.

The most on-point Birthmark joke comes at the very end, when Abbi and Ilana are sharing their sudden moments of spiritual awakening during the flight to Israel. Abbi says she saw Jesus when she was tackled to the ground, and Ilana realized that her life goal is to make enough money to fly first class after feeling the plush carpet on her cheek. Birthright trips are often marketed to young Jews as an opportunity to reconnect with their Jewish heritage and rediscover their religion, but the reality is that most people just want a free trip to Israel. Ilana and Abbi exchanging their a-ha moments without having stepped foot in the homeland is Broad City’s way of remarking on the fact that the free aspect of the trip is often more enticing to young people than the religious one.

The comedy in “Jews on a Plane” is pretty insider to Jews, so this episode might not resonate with non-Jews the way other episodes have. The most noteworthy part of this episode, though, is that it concluded Season 3 with some top notch Abbi and Ilana tomfoolery following other episodes that were surprisingly serious. This season finale ought to tide us over until Abbi and Ilana return next year for a new season.