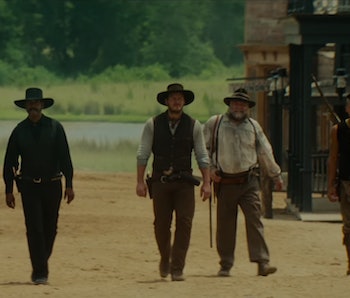 Western movies have struggled to reclaim the cultural prominence they held in the early 20th century, but its influence runs deep in today’s most popular movies and shows, including hybrid hits like Star Wars and Breaking Bad. It’s unclear whether the western is making a comeback — The Hateful Eight was lit, The Lone Ranger wasn’t — but Fuqua’s Magnificent Seven looks primed to reinvigorate a sleeping genre.

Here’s everything key to know about the resurrection of The Magnificent Seven.

You’re probably wanting to know who’s starring in this thing. Here it goes:

Ethan Hawke as Goodnight Robicheaux, which is AN AMAZING NAME, who is a sharpshooter.

Martin Sensmeier, who grew up in the Native American Alaskan community, as Comanche warrior Red Harvest.

The film also stars Hayley Bennet as a widow who hires the titular Seven, Vinnie Jones, and Peter Sarsgaard as Bartholomew Bogue which is ALSO an amazing name, as the lead antagonist.

Commenting on the shoot with Collider, Hawke expressed his enthusiasm and called the production an “adventure.”

“It was what you call an adventure,” he said. “Some movies are work, and some movies are all about acting and character, but this was about learning to ride a horse and shoot a six-gun at the same time. I really enjoyed it.”

Several major names like Matt Damon, Morgan Freeman, and Kevin Costner were attached to the film before obviously leaving, while Washington replaced Tom Cruise and reunited with his Training Day director Fuqua. And until he was signed on for Justice League, Game of Thrones alum Jason Mamoa was also attached to the project. So, our final Seven would have looked pretty different if the dominoes fell differently.

Besides the obvious Sturges movie, Fuqua is looking at other films to shape his Magnificent Seven. Via ComingSoon.net, Fuqua said his movie will have more in common with Sam Peckinpah’s The Wild Bunch, another timeless entry in the Hollywood western. ComingSoon.net also said the movie will incorporate humor similar to Butch Cassidy and the Sundance Kid as well as the kind of scale Sergio Leone made in his spaghetti westerns.

It has the final score from composer James Horner

Last summer, prolific Hollywood composer James Horner passed away in a plane crash shortly after signing on to score Fuqua’s remake. Later, Fuqua discovered Horner prepared the score before he died, allowing The Magnificent Seven to be his third and final posthumous work.

Fuqua also recalled how Horner was the one who convinced him to direct Magnificent Seven. Via ComingSoon.net:

“James … is the reason I wound up doing the movie … I went to his house. Before we even went inside, we stood outside in this garden area and I was just f—ing complaining, to be frank. I couldn’t get the money. You need seven actors. They have to be movie stars. The whole Hollywood system sometimes is tough. You have to have a certain level of actor to make a western because of this and that and other s—t. I just wasn’t feeling the love at that moment … He kind of looked at me and said, ‘You have to do it. Antoine, you’ll make history.’”

It was also co-written by Richard Wenk and John Lee Hancock, whose previous credits include Saving Mr. Banks and Snow White and the Huntsman.

It’s stocked with a diverse group of cowboys

Commenting on the film’s vibrant casting, Fuqua expressed how he wants the film to reflect 2016 America than 1886.

More like this
Entertainment
Sep. 25, 2022
Knock at the Cabin trailer gets roasted online for one bizarre mistake
By Alex Welch
Entertainment
10 hours ago
Vesper is a breathtaking sci-fi warning about our real-life future
By Eric Francisco
Entertainment
7 hours ago
Christian Bale reveals the secrets of his “weird” transformation in Amsterdam
By Jake Kleinman
Related Tags
Share: