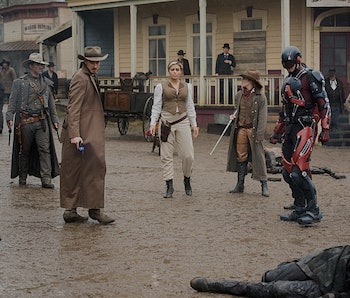 It’s OK if you forgot about Jonah Hex, the awful sci-fi western starring Josh Brolin and Meghan Fox from 2010. Warner Bros. would probably even prefer it. But the character Jonah Hex, an outlaw with a code of honor, still exists within the DC universe, and post-Dawn of Justice a Jonah Hex movie wouldn’t get made without burdensome references to Darkseid or Batman. But in Legends of Tomorrow, the Arrowverse’s bus tour through DC’s expansive comic book universe, still lets Jonah roam free (sorta) while cranking up the show’s pure goofiness to the delight of all.

The set-up for “The Magnificent Eight” is pure plot gibberish, and that’s okay because it lets the show zoom right into the novelty of going western, which would be stupid if it never did. The Waverider crew hides from the Time Masters in a small southwestern settlement in 1870, immediately prompting the characters to play dress up (including Rory, the former Heat Wave played by Dominic Purcell). In a nod to John Sturges’s 1960 film The Magnificent Seven (or cowboy The Avengers), the Legends stick around to protect the town from a ruthless throng of black hats called the Stillwater gang.

Jonah Hex (Johnathon Schaech), the very same scarred cowboy from DC Comics, is the Virgil to Legends of Tomorrow’s group of heroic Dantes, and disappointingly stands around to dole out exposition instead of being the gunslinging badass he should be. He’s not much of a step up from Josh Brolin’s turn as the character, but at least that guy got in the action.

Still, Legends of Tomorrow continues its overall hot streak with a fun episode that does nothing more than satisfy. Seeing the characters dress like cowboys is the right kind of goofy anyone should expect from a show like Legends of Tomorrow. As the series approaches its season finale you can be sure things will get serious — the Omega Protocol has been initiated by the Time Masters, and it’s as bad as it sounds — but until then, it’s good to see some old fashioned fun.

More like this
Entertainment
Sep. 20, 2022
Constantine 2 signals new life for DC movies — but at what cost?
By Eric Francisco
Entertainment
12 hours ago
The MCU’s Ironheart will improve on the comics in one pivotal way
By Richard Newby
Entertainment
Sep. 22, 2022
Mandalorian Season 3 release date may be sooner than you think, actor reveals
By Dais Johnston
Related Tags
Share: