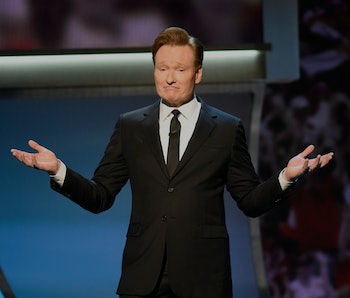 Just over six years ago, Conan O’Brien, a man without a TV show for the first time in two decades, joined Twitter — and immediately took the platform by storm.

This was just after the big Tonight Show blow-up and the world was rapt, waiting to hear what Conan had to say about his forced exile from NBC. One day he decided to follow someone and, in true Conan style, it was random civilian with — at the time — three Twitter followers. Her name? Sarah Killen, a student from Michigan with the handle @LovelyButton. Since that fateful day, she’s met the man himself, gotten married, had a daughter, and accumulated some 309,000 Twitter followers. Things have settled down quite a bit for her, to be sure, but we wanted to check in, so we caught up with her via email to see how she’s doing today — a day when she remains the only person Conan follows on Twitter.

Do you have any favorite memories from six years ago?

My favorite memory from six years ago would definitely have to be meeting Conan! He invited me to his show at the Breslin Center and I was able to bring my parents and three other guests. He was just as kind and hilarious as you’d assume him to be.

How did it change your life, if it all?

Impacting life changes? I would have to say not really. It was really nice to meet people that I would not have, otherwise I see no lasting effect.

Have you spoken with Conan in the past few years? Do you watch his show?

Unfortunately, I have not spoken to Conan in a few years. While I am not a big TV watcher I have caught and enjoy his show.

What have you been up to?

I am finishing up an anthropology degree, enjoying studying midwifery, running a Doula business, and enjoying watching my daughter grow.

It’s pretty wild he hasn’t followed anyone else on Twitter, huh?

I am a little surprised that I remain Conan’s only Twitter pal.

Actually, Amy Schumer follows me, which I was very excited about.