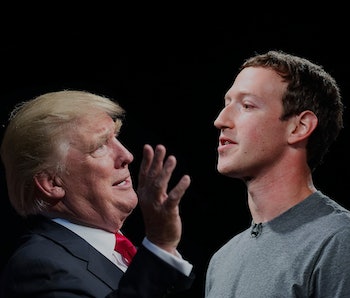 Gizmodo reports today that Facebook employees wanted to ask Mark Zuckerberg whether Facebook as a company has a responsibility “to help prevent President Trump in 2017.”

Each week, reportedly, Facebook employees get to ask Zuckerberg about whatever they so wish. The questions arise from an internal company Facebook group poll, and Zuckerberg presumably addresses the most popular questions. This particular question and answer took place on March 4, and the Trump question ranked fifth.

The question, in full: “What responsibility does Facebook have to help prevent President Trump in 2017?” The leading question (“Are we doing enough in tooling and training to prevent fireable offenses?”) had 186 votes (which in fact is, on its own, odd and fascinating); the Trump question had 61.

Historically, Facebook has not proven a stranger to low-key tampering. Gizmodo reports that the social network has altered News Feeds and even experimented upon Facebook users in the past. But an invisible, tinkering hand in the political process would be unprecedented — and, with its active user base approaching two billion people, it would be significant.

That this question preceded Facebook’s F8 developer conference, however, is intriguing. There, Zuckerberg made a not-so-veiled reference to Trump’s agendas. Perhaps Zuckerberg — if he heard of, saw, or responded to that employee poll — decided that this was the best route for him to take.

One thing’s certain: Facebook’s sniffing out the rat, and — at a company where you have to sign an NDA just to look around — will surely have exterminators on hand.