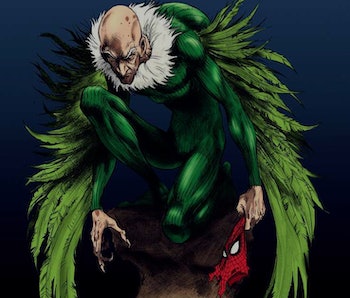 Yesterday, Variety broke the news that superhero veteran Michael Keaton is in early talks to play the villain in next year’s standalone Spider-Man flick, Homecoming. Though the plot of the film — which stars Tom Holland as the web-slinger — is being kept under very tight wraps, the prevailing theory right now is that Keaton will take the mantle of yet another winged creature: the Vulture.

According to BirthMoviesDeath, “The Vulture will be in this movie.” That’s pretty unambiguous. Though it remains to be seen if the old bird will be the film’s main villain. It’s not exactly a huge leap to suggest that Keaton, the aging icon, will strap on a pair of wings and start robbing banks.

Though Keaton is a welcome addition to any cast — regardless of his role — Marvel can get just a little bit more creative when it comes to saddling such a talented actor with a villainous guise. Sure, Keaton could totally pull off the Vulture, but — as our man Eric Francisco pointed out — the Homecoming arc really leaves the villain spot wide open.

With all that in mind, here are a few unrepresented members of Spider-Man’s rogue’s gallery that we’d love to see Michael Keaton embody. And none of them have anything to do with shit that flies.

Call this one a shout out to the tech crew, the unsung heroes who work behind the scenes to make movie magic so appealing to audiences all over the world. Given how much work they do and how little credit they get, it’s only natural that, eventually, one of them would crack. That was the case for Quentin Beck, the special effects wizard who just wanted to get a little bit of attention.

Why Keaton Could Play Him: Not two years ago, Michael Keaton won an Academy Award for playing a burnt-out actor who was trying to mount a comeback in the most unlikely of ways. Just switch that comeback trail from Broadway play to murdering a costumed hero and Keaton is already halfway dialed in to Beck’s insanity.

Michael Keaton as Curt Connors is an easy role to root for, if only because of the character’s potential for bit parts in other Marvel films. After all, Homecoming is a Marvel joint and those guys love signing actors on for several films. Connors is a professor/lab tech (always useful in a Marvel movie) who isn’t a bad guy … he’s just not great with biology. As the emotionally wounded amputee, Lizard is always a compelling villain paired with insecure teen, Peter Parker.

Why Keaton Could Play Him: Connors is a Dr. Jekyll and Mr. Hyde villain, with completely opposing personalities. One minute he’s a good natured dork just trying to make himself a whole person, the next he’s a slathering monster ready to rip you to shreds. Keaton is among an elite rung of Hollywood actor who’s capable of playing the subdued good guy (Multiplicity) and the make-up clad crazy person (Beetlejuice). The man has range.

Kraven is the consummate evil big-game hunter. A man with a troubled Russian childhood who learned to take out his frustrations on animals, Kraven eventually worked his way up the ladder of Africa’s most lethal predators until he, inevitably, was hunting the most dangerous game for kicks. As he shows a preternatural talent for murder, Kraven soon goes into business for himself and (perhaps inevitably) makes his way to the asphalt jungle to fulfill a contract on a certain wall crawler.

Why Keaton Could Play Him: Let’s see, where have we seen Michael Keaton play a character that’s essentially a total animal hiding under a thin veneer of civility …

Because, thanks to Deadpool every superhero can now go hard ‘R’, maybe its time to inject a little murderous insanity into Peter Parker’s Universe in the form of Cletus Kasady, a crazy-ass serial killer who bonds so thoroughly with his symbiote that he achieves a power that completely eclipses both Venom and Spider-Man. Again, Kasady has real crossover potential, too, since Sony has officially revived their Venom movie. Way back in 2014 before that film was briefly canned, a Carnage appearance was planned.

Why Keaton Could Play Him: Uhm, see every third role Michael Keaton has ever done. The guy has such extensive experience playing crazy people that it makes you wonder just how normal he can actually be. In the sea of examples, let’s highlight 1998’s underrated performance in Desperate Measures in which, fittingly enough, he plays a serial killer who’s so remorseless he’ll let some poor tyke die just to get out of his cell and spread some chaos.

Okay, the plot’s a bit thin, but Keaton nails his turn as a deranged sociopath to the point where Cletus Kasady might actually be a step back for the actor.