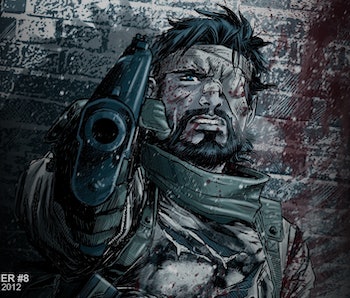 Deadpool will hit theaters in a rush of blood, guts, and chimichangas in February, possibly leading the way toward a collection of MCU movies that aren’t afraid to say the word “shit”. As fun as it would be to see Deadpool get under Cap’s skin — he gets under everyone’s skin in the comics — we predict it’ll be even more fun to enter a MCU where superheroes can call villains “assholes” and have actual sex with people.

So who are the most likely R-rated heroes from Marvel? Let’s begin with the frontrunner.

Netflix’s second season of Daredevil will introduce the ruthless superhero Frank Castle, aka The Punisher, but the character won’t receive his full due until he gets his own R-rated TV series or film. The potential for a gritty Punisher film was illustrated for fans when the character, played by Thomas Jane, was featured in a Bootleg Universe short film back in 2012. The short, clocking in just under 11 minutes, promised a Punisher who wallowed in the darkest depths of humanity.

Jon Bernthal, of brief Walking Dead infamy, will play The Punisher on Daredevil. Though pre-production news confirm that the character will murder every criminal he can find, and will advise Daredevil to do the same, it’s not clear how violent his actions will be.

Technically, 1997 gave us a Spawn film, although no one, beyond really dedicated fans, really remembers it. Spawn, the creation of Todd McFarlane, was released by Image comics back in 1992 and immediately became a cult favorite. The character, a demon-human hybrid which originated in a deal between a dead soldier and the demon Malebolgia, set out to torture and murder any criminal he wanted, though his speciality was taking out pedophiles.

A reboot of the Spawn franchise would have to commit to dark themes in order to do the franchise any justice. In a fan expo back in March, McFarlane told the audience any reboot of Spawn would be more of a “horror-thriller” than a superhero story. In an interview with Comicbook, a blog, McFarlane confirmed that he’d only sign off on a reboot with an R-rating. Considering a great deal of the comics take place in Hell, this is probably a good idea, in order to avoid any campiness.

Even Lobo’s creators, Roger Slifer and Keith Giffen, are at a loss when asked about their character’s popularity. They originally wrote the alien bounty hunter as a satirical take on ‘roided-up “gritty” action heroes, but the DC character found an audience of his own back in the 1980s.

Back in 2012, a film adaptation starring Dwayne “The Rock” Johnson was rumored to be in formation, but Johnson himself dispelled the rumors later. Since Johnson is now doing screechier, more comedic movies with actors like Kevin Hart, he’s not likely to take on a character like Lobo. Any film adaptation of the intergalactic bounty hunter deserves a rating that allows it to show uninterrupted violence, and that might be a hard sell.

2015 was a big year for female superheroes, and the darkest of those featured in television series was Jessica Jones, who, admittedly, isn’t really all that dark. All of the critical support for Jessica, a survivor of rape and dedicated alcoholic, bodes well for future adaptations of female heroes whose stories explore darker themes. One of the most interesting characters of this ilk is Cassandra Cain, the daughter of two Gotham super villains who had a brief stint as Batgirl. Cain, who was helped in the comics by a wheelchair-bound Barbara Gordon (former Batgirl, current Oracle), could be a nice tie-in to DC’s new Gotham universe, though she might have worked as a better protege for Christian Bale’s Batman, rather than Ben Affleck’s version.

What’s the case for an R-rated Cassandra Cain movie? Well, first of all, she’s a half-Asian teenager who tracks down both her biological parents in order to kill them for creating her. She, like Batman, has a soft spot for abused and neglected children, and often follows kids around in Gotham in order to make sure they’re safe. Her villains are just as disturbing as Batman’s (as they sometimes overlap), and in later storylines, she escapes to Hong Kong in order to track down Lady Shiva, her mother. Imagine a colorful, disturbing superhero film set in a night-time Hong Kong that resembles the set of Blade Runner, and you’ll see what I mean.

Okay, hear me out. Female superheroes don’t have to be gritty and Punisher-style disturbing in order to merit R-rated movies (though just the prospect sounds awesome). Imagine a superhero film with all the sexy jokes featured in Deadpool, but without all the gore. What do you get? Why, a steamy, silly Starfire adaptation that feels like Barbarella or Austin Powers, of course!

In 2015, many female superheroes received revamped solo comic runs which gave them heavier storylines and improved, more-modest costumes. Starfire covered up a bit too — moving from a teeny purple string bikini to a crop top — but the central joke of her series remained the same: this innocent alien girl doesn’t understand her own sex appeal, and she mercilessly teases the male superheroes around her. Male heroes who know her, including Robin, have a hard time containing their boners while trying to fight alongside her, which makes for a lot of great dramatic irony (and sexual tension).