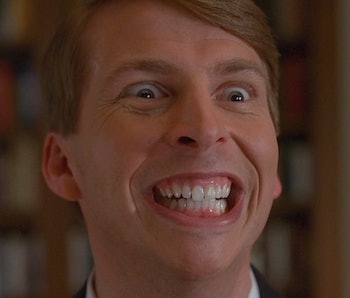 For seven wonderful years, the leftist East Coast hijinks of Liz Lemon and the crew on 30 Rock were nurtured by an apple-faced goon who never failed to support his friends. That goon, Kenneth Parcell — played to perfection by breakout star Jack McBrayer – was the cast’s divine protector, an ancient being wrapped in the earthly bonds of an eager, hard-working hick. Raised in the backwoods of Georgia, Andromakennethamblesorton Ellen Parcell was 30 Rock’s unwavering ray of sunshine.

The rube that fans came to love on the sitcom was just a brief glimpse at Kenneth Parcell, the man who walked the Earth for more than two hundred years spreading his weird brand of joy and religious zealotry. Truly, in the annals of TV history there is no other character who sees the world quite like Kenneth Parcell.

According to the show’s hundredth episode, Kenneth Ellen Parcell was born in Stone Mountain, Georgia (formerly Sexcriminalboat) on May 27, 1781 to Pearlene Parcell and an unnamed pig father. Various sources reported that the two were either cousins or, as Kenneth once put it, “technically brothers.” Regardless of his parentage, Kenneth’s mother saw something special in her son from the very beginning.

One of ten siblings — three of whom were given up for adoption — Parcell was raised in a proud, poor, rock hard clan of mountain folk. “Rock hard” isn’t an expression, by the way; in his childhood, rock soup with a squirrel tail kicker was considered a lavish meal. Unfortunately, Kenneth’s father died when he was a boy. His father’s last would stay with Kenneth for years to come:

“Son, if you want to get ahead in this world—oh God, this hurts! Tell your mother I’m gay!”

After the death of Kenneth’s father, his “mom’s friend” Ron moved in, much to Kenneth’s chagrin.

It was around this time that Kenneth fell in love with the comforting glow of the television. In spite of the lacking father figure, Parcell grew up in the rich family tradition of a Parcell man, working hard and delving into a sect of Christianity that’s even far-fetched to people who bring snakes to church.

His religion, the Eighth Day Resurrected Covenant of the Holy Trinity, believes that driving on freeways is a sin, Kevin Bacon is the villain in Footloose, and that Boss God presides over a host of lesser deities, and that any warm liquids are inherently evil.

While the finer details of Kenneth’s religion may seem odd to an outsider, it gifted the simpleton hosting an ancient being with an immutable sense of right and wrong and — against all odds — a profound love for humanity. And television.

After attending a predominately black high school in Stone Mountain, Kenneth attended the prestigious(ish) Kentucky Mountain Bible College where he majored in Television Studies and Bible Sexuality. All this in spite of a life-long issue with donkey spells.

Throughout his first two centuries on Earth, Kenneth Ellen felt the pull of the big city and the call to work in television. However, he stayed home, mostly to be close to a pig named Harold that Parcell had raised from infancy. After Harold was sold to a slaughterhouse, Kenneth decided to cut ties with his home and move to New York. He need only raise the money by entering and winning a pig-eating contest.

In an O. Henry-level twist of fate, the pig that landed on Kenneth’s plate was Harold, his best friend and mentor. Of course, not even atrocity could keep Kenneth from his dream.

A Trip to the Big City

In the 1930’s, a spritely 200-year-old Kenneth Parcell moved to New York, where soon found work on the lowest rung of NBC’s totem pole. Of course, the degrading work was a blessing to Kenneth, who felt fulfilled as a cog in the vast machine of television. How could you be upset when an 8-year-old Shirley Temple teaches you to roll a smoke and TV legend Fred Allen knows you by name.

As he worked in the recesses of television history, Kenneth has found his way into several moments in history. You just have to keep your eyes peeled. I mean, who can forget the immortal 1950’s classic, “Doin’ the Microwave”? In a taped performance of the song, Kenneth can be seen in the front row, dancing happily.

It wasn’t until he took up the job at Liz Lemon’s The Girly Show, though, that Kenneth Parcell would really come into his own and test his limits. While keeping a deft lid on his immortality, Kenneth would help guide the lives of the souls working on television’s worst sketch comedy. During this time, he would not only confront his faith in his personal dealings with Jack Donaghy, but megastar Tracy Jordan would influence him to ride the brown serpent (caffeine). Kenneth would also finally develop some confidence.

At the end of his adventures with Liz and her cabal, Kenneth would find himself in the top spot at NBC, programming the kind of shows that are fit for Christians and old people. The journey was long and hard and full of compartmentalization.

But Kenneth came through (or will come through) with his inimitable spirit still firmly in tact and his first two loves still guiding him even after hundreds of years.