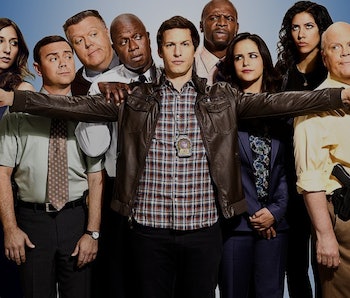 I’ve worked as a remote writer for almost two years now. My version of unplugging at the end of the day is binge-watching shows no one cares about enough to live-tweet, like M.A.S.H., Designing Women, and NewsRadio. I enjoy the classic sitcom structure, but I also experience a nostalgic yearning for the white collar setup my grandparents and parents experienced.

So much of The Office already looks antiquated to me, because all of my friends are either working in food service, freelancing, nannying, or communicating on Slack, as I do, with a network of coworkers they haven’t even met, let alone gotten to know well enough to develop nicknames for. It’s a lot more difficult for a 20-something to coast her way into a cushy full-time job like Brooklyn Nine-Nine’s Hitchcock and Scully apparently did. In fact, I don’t know any mediocre workers my age, because they never last long in any particular position. That bastion of workplace sitcoms, the bumbling employee no one trusts not to fuck it all up, is a dying breed.

Part of me wishes middle-management still looked like Liz Lemon on 30 Rock, who was aware of her employees’ personal lives and saw them often enough to foster inside jokes and grudges. Another part of me wonders what workplace sitcoms will look like 10 years from now, if they exist at all.

Though the white collar culture and landscape is shifting away from “pencil pushers” and bureaucrats, we’re likely to see more sitcoms based in unique professional cultures like the military, medicine, or law enforcement. That means Law and Order spin-offs will likely continue until we’re all watching Law and Order: Martian Unit on Tuesday evenings with leftover pasta. More and more of us will join teams that have no choice but to blend the professional sphere with the personal, because tech startups are one of the only industries hiring.

What I’m describing, specifically, is the death of sitcoms set in offices where the product is tangible and boring. Realistically, Dunder Mifflin would have outsourced its warehouse and streamlined its sales team to a couple of remote workers who live out of suitcases and check in via Google Hangouts once a week. In today’s culture, incompetent middle management culture looks more like Ilana’s boss at Deals Deals Deals on Broad City, or Bertie’s lame focus-group facilitator job on Netflix’s Love.

Classic sitcoms drew so much from the stark difference between their characters’ professional and personal lives. There’s a great scene from The Dick Van Dyke Show where Rob is hypnotized into thinking he’s drunk whenever a bell rings. We watch him stumble “drunk” around his desk and piss off his boss, and today’s audience struggles to imagine how this bit must have hit office workers in the early ’60s. He can’t be drunk in the office, that’s insane! What a hoot, he can’t even put his phone back on the hook!

In 1975, The Mary Tyler Moore Show ran an episode in which several characters are up for an award. The comedy in this setup is derived from each character, including cranky Lou, wanting fervently to be noticed by his or her superiors. Again, this episode aired in a time period when fostering a supportive company culture, and giving workers incentives beyond pay, was an innovation. The panic that erupts in the office illustrates how the common worker responded to praise from her boss.

When I graduated college, I was given all kinds of quaint advice from professionals who had worked most of their careers during the ’80s. I was told to buy expensive résumé paper despite most companies rejecting any applications not sent online, and to get a woman’s suit and get it tailored. (I have worn my navy suit a grand total of twice in three years, and once was for a Halloween costume.) Even my friends who do work in office environments wear whatever they want, and are typically urged by their superiors (who aren’t much older than they are) to be flexible and make time for themselves. When I think about how many great old-sitcom Christmas party episodes I’ve seen — you know, the one where someone spikes the punch and all the stuffy workers say what they really mean? — I wonder how writers will keep that tension going in future shows. Even writers on ’90s sitcoms had to invent ways — team-building retreats! prank wars! — to keep their offices feeling fun.

The fact that the characters on Parks and Recreation operated more like an extended family unit than a group of coworkers proves that today’s young professionals don’t find kookiness in the office funny, because it’s not novel to us. Even Brooklyn Nine-Nine, which is arguably the only real Parks successor on television, had to create a very unique boss in Captain Holt in order to recreate some of the classic power structure. Amy, the only character on the show who seems to respect Holt as a boss, is often ridiculed by her peers for being an obsessive, type-A perfectionist.

On last week’s episode, we saw Holt admit to his employees that his marriage had hit a rough spot, and the revelation made sense considering how emotionally intimate the show’s characters had already been with each other. That kind of scene would have been considered insane on a sitcom produced 10 years ago, because a boss was still, emotionally and culturally, a monolith of authority, more a cog in the corporate wheel than an actual person.

An integral part of Michael Scott’s zaniness, when The Office began, was that he still clung to antiquated ideals of corporate culture and wanted his employees to consider him like a father figure. He wanted to be Alan Brady from The Dick Van Dyke Show, and he bought himself a “#1 Boss” mug, an object which I’m pretty sure is sold only ironically now. While Jim and Pam’s development was delivered on The Office as a happy ending, many younger viewers were confused; getting married and giving up on her dream of becoming an artist was the last thing Pam’s character would have wanted, if her show had been set in 2016. Instead, because most of The Office was written mid-economic-crisis, it wasn’t quite sure what to do with its characters, who had begun the show as realistic depictions of bored American white collar workers, and had to yearn for something more in the sitcom’s later seasons, in order to seem relevant. Maybe in a few years, we’ll get a similarly-saccharine Modern Family sitcom for the contemporary workplace, one that comments at the end of every single episode on how some notions of professionalism and drive haven’t changed, though the typical American worker looks very different than she did back in 2000.

More like this
Entertainment
Jan. 27, 2023
Onyx the Fortuitous and the Talisman of Souls is a cringe comedy as overlong as its title
By Andy Crump
Entertainment
Jan. 18, 2023
Everything you need to know about That ‘90s Show on Netflix
By Claire Fox
Culture
Jan. 26, 2023
Michael J. Fox’s strangest movie remains a stupid, ridiculous joy
By Mónica Marie Zorrilla
LEARN SOMETHING NEW EVERY DAY.
Share: