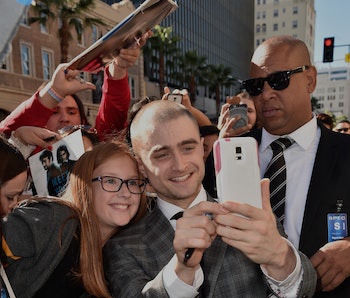 Inspired by the recent headlines on government surveillance and whistleblowers like Edward Snowden, Graham and Donmar Warehouse artistic director Josie Rourke’s play examines the state of ubiquitous technology and personal information. The The New York Times reports that uniquely, patrons will be urged to keep their cell phones on.

Radcliffe, whose career began then skyrocketed through the Harry Potter film franchise, will star in Privacy as a writer “loosely modeled” on Graham. The play will also feature Saturday Night Live alum Rachel Dratch, Michael Countryman (Burn After Reading), Reg Rogers (Runaway Bride), deAdre Aziza, and Raffi Barsoumian. The play will run from July 5 until Aug. 7.

This won’t be Radcliffe’s first time on stage. Post Harry Potter, he has bucked type-casting in plays like Equus, the musical How to Succeed in Business Without Really Trying, and The Cripple of Inishmaan. He has also starred in indie and mainstream films like Horns, Victor Frankenstein, and a farting corpse in Swiss Army Man.

More like this
Culture
Sep. 15, 2022
The cults that survive even when the prophecy fails
By Peter Ward
Entertainment
13 hours ago
Sauron cultists? Rings of Power may have just solved the show's biggest mystery
By Alex Welch
Entertainment
10 hours ago
Is Adar actually Sauron? Rings of Power just dropped a major clue
By Alex Welch
Related Tags
Share: