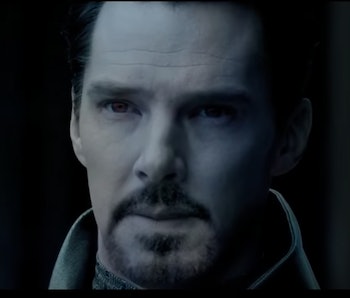 Doctor Strange is going to be a weird and very different kind of superhero movie when it drops in November. Unlike your typical Marvel heroes — Thor, Captain America, Ant-Man, or Tony Stark — our hero isn’t muscled like a young Schwarzenegger. It’s also concerned with mysticism beyond the hero looking sad in the rain while an alt-rock song plays. Oh, and there’s magic. Not the vaguely defined magic of Thor’s hammer, nor the Avengers magical ability to communicate sans ear pieces. Actual, real magic. This is iffy ground for an action movie; magic onscreen can easily go haywire.

Doctor Strange would do well to look, with constant vigilance, to the Harry Potter franchise for ways to best navigate magical action.

1. Magic must have limits

The Harry Potter world is complicated, but it also has a well-defined magical system. The wand chooses the wizard. Curses that violate human rights are Unforgivable. You can’t just Apparate anywhere you want. And who can forget The Five Principle Exceptions to Gamp’s Law of Elemental Transfiguration? Neville forgets it in Deathly Hallows but Ron sure doesn’t.

“I went through it and met Aberforth,” said Neville. “He’s been providing us with food, because for some reason, that’s the one thing the room doesn’t really do.”

“Yeah, well, food’s one of the five exceptions to Gamp’s Law of Elemental Transfiguration,” said Ron to general astonishment.

When magic is present in a story, every plot turn has the potential for a deus ex machina, which is incredibly boring. Harry Potter retains its tension by placing its characters in perilous situations they can’t always magic their way out of. The Gringotts heist in Deathly Hallows remains one of the story’s best action set pieces because Harry, Ron, and Hermione are flying by the seat of their pants. They have no idea what they’re doing, and it’s exhilarating.

If Doctor Strange wants its magic to translate cleanly, its twists and turns to thrill, it needs to establish its magic’s limits. Otherwise, every dilemma loses its tension if our hero can easily wave his hands and make it disappear.

The Harry Potter universe is massively popular, in part, because it feels plausible. It’s not in some strange land; it’s a secret society within our own. When characters are in the “real” world, they have to abide by our rules. Areas like The Department of Mysteries and that damn veil remain enticingly vague, because the characters don’t understand death any more than we do.

If Doctor Strange wants to be accessible to comic fans and novices alike, it should follow suit. After all, if Rowling was able to communicate her complicated world to kids, she found a method worth imitating.

The Harry Potter universe was never afraid to diverge from magic when it needed to. In fact, the most satisfyingly badass moment in the entire series couldn’t have happened in any movie. It’s good old-fashioned action in the form of Neville slaying a giant snake with a sword.

And sure, giant snakes and swords aren’t likely to be in a non-magical story, but Neville’s slaying methods are straightforward. Because there’s no razzle-dazzle to distract us, we have a front-seat view to his crowning moment of character development.

If Doctor Strange wants to impress us with the good doctor’s actions, it would do well to emulate the Potter story, and its skillful balance between magic and the mundane.

4. Don’t take yourself too seriously

The Harry Potter series has a lot of humor, whether it’s Weasley twin shenanigans or Harry and Ron failing at life and girls.

The humor serves two main purposes. It makes the characters real and relatable, even against the backdrop of fantastical events; and it softens some of the obligatory exposition sections that inevitably come with magic.

“So he can sneak up on people,” said Ron. “Sometimes he gets bored of running at them, flapping his arms and shrieking…”

Doctor Strange would do well to remember that even the dark and mystical needs regular doses of levity.

5. Don’t be afraid to get emotional

Magic is meaningless when it’s just bright colors zooming amid zany sound effects. You could be watching a psychedelic music video, for all it stirs you. On the other hand, when the story isn’t afraid to gut-punch us with human emotion, that’s when it anchors us. We’ll follow it on whatever mystical ride the narrative wants — if it just makes us care.

The Harry Potter stories set a new standard for magic-heavy action movies. And while many have failed to meet it — with convoluted offerings like Percy Jackson, The Mortal Instruments, and The Last Witch Hunter — Doctor Strange, hopefully, can knock it out of the ballpark. As long as it remembers The Five Principal Exceptions to Gamp’s Law of Elemental Transfiguration.