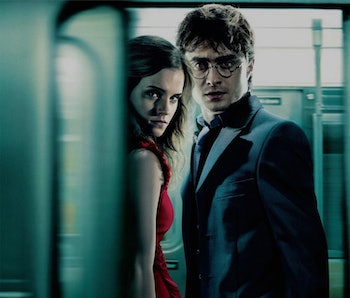 It’s hard to believe, but Harry Potter and the Deathly Hallows Part 1 came out five years ago today. It still feels like yesterday that this Inverse writer suited up as Hermione — with more accurate Hermione hair, because “bushy hair” Emma Watson? Please — to go see it on opening night.

My only regret is that I took my Charms textbook instead of Defense Against the Dark Arts. I don’t know what I was thinking.

Five years ago, we were young and naive: franchises dividing their final installments into “part 1” and “part 2” hadn’t become tired and exploitative yet. In fact, Harry Potter was the first to start that trend, and the only one that deserves it. We also didn’t realize that Deathly Hallows Part 1 would have quite so much forest-wandering and that all the most exciting parts from the trailer would be in Part 2.

Five years on, we’ve grown and changed and learned a lot, so let’s re-assess.

About those unimportant points in the book we glossed over…

Of all the Harry Potter films, Deathly Hallows was the one in which the writers realize they screwed themselves in previous installments by glossing over parts of the books they assumed were unimportant.

“Introducing Bill Weasley in Goblet of Fire and including Greyback’s attack in the The Half-blood Prince? That will take a grand total of five minutes, but psh, that can’t be important!” thought the writers.

But they swallowed their words faster than butterbeer when they realized that Bill’s wedding and Shell Cottage are vital settings in Deathly Hallows. Oops. They tried to remedy this mistake with their most awkward maneuver yet: pretending Bill and Harry were just meeting in Deathly Hallows. As an added bonus, they also clumsily shoehorned in Tonks and Lupin’s “by the way, we’re married!”

This was a lesson to all scribes who think the little details are unimportant. Everything in Rowling’s world is important guys!

The thing Deathly Hallows unquestionably gets the most shit for is the copious amount of time it spends following Harry, Ron (until he pulls that dick move and ditches), and Hermione as they wander aimlessly through forests. And countryside. And more forests. So many forests.

But the above scene illustrates why I’m coming out and taking the controversial stance as pro-forest: if Harry knew all his shit and was kicking ass and taking names right off the bat, it wouldn’t be the series we love. Harry is a regular guy, not a superhero: he learns, he struggles, he makes wrong choices. For any Buffy fans out there, Harry wandering through the forest is his equivalent of Buffy’s polarizing sixth season, which I also liked: it’s the time period of early adulthood when nobody knows what’s going on and shit is getting real.

For all that the Harry Potter series involves — battles and Gringotts heists and undercover Ministry break-ins — if the story was only the sum of its big set pieces, it would be just another fantasy-action series. We’re attached to Harry Potter because its characters are relatable and their dynamics are compelling. Harry needed to fuck up for a bit before defeating Voldemort, otherwise he wouldn’t be Harry. The quiet character dynamics are just as important as the big events.

Don’t get me wrong; the forest-wandering is negative in the precedent it set for future franchises. Take The Hunger Games series: Mockingjay in no way warranted two movies because nothing actually happens in the first. But unlike Mockingjay’s barrack-wandering, Harry’s forest-wandering is not the entire movie: between scenes like the seven potters, the wedding, the Ministry break-in, the Godric’s Hollow trip, and Malfoy Manner, the forest-wandering constitutes barely a quarter of the film. It’s been unfairly maligned, but in retrospect, it wasn’t so bad.

The Harry Potter films made some truly baffling edits, like the aforementioned Bill Weasley cut that came back to bite them in the ass, or that time The Burrow randomly burned down in the sixth film when that never fucking happened. But Deathly Hallows is perhaps the only film that embellished a scene in a way that was not only tolerable, it made everyone — including J.K. Rowling — ponder the cannon. This part made even the best of us briefly consider, “hmm, what if Harry and Hermione did happen…”

Rowling said in an interview with Emma Watson, “In some ways Hermione and Harry are a better fit, and I’ll tell you something very strange. When I wrote Hallows, I felt this quite strongly when I had Hermione and Harry together in the tent! And actually I liked that scene in the film, because it was articulating something I hadn’t said but I had felt. I really liked it and I thought that it was right. I think you do feel the ghost of what could have been in that scene.”

About that breakdown of the muggle world and the magical world…

Aside from its characters, one of the primary qualities that draws fans and makes Harry Potter stand apart from other entries in the genre is that it’s technically urban fantasy, not straight fantasy — We’re not in Westeros or Middle Earth or Narnia, we are in the real world as we know it. That holds all manner of potential; tickles the imagination perhaps even more than fantastical worlds. From the ancient Romans to the illuninati to Donna Tartt, who isn’t fascinated by a secret society within our own?

Previous installments didn’t utilize the real-world setting much, since Harry and the gang spent the majority of their time at boarding school. But in Deathly Hallows, for the first time, we see Harry, Ron, and Hermione facing passive-aggressive waiters in coffee shops, we see Hermione getting catcalled on the London streets. As fun as it was to see them battle among dragons and magical veils and prophecy balls, it’s a trip to see them in ordinary everyday settings, dealing with the same shit we have to deal with.

And finally, about that ending…

Dobby’s death slayed us all. I didn’t even like Dobby much; he’s the Jar Jar Binks of the series. But for some reason, his death at the end of the film was really fucking sad. I shed a tear in the theater for the little guy and my friends made fun of me afterwards, and I have no regrets. Also I was obviously being Method as Hermione, for S.P.E.W.

In the five years since Harry Potter and the Deathly Hallows, the series is far from slowing down: with a wizarding world not-quite prequel and a theatrical not-quite sequel both forthcoming, the future is looking bright for Potter fans. But on this five-year anniversary, we look back at its past and raise a glass of firewhiskey to Deathly Hallows, forest wanderings and all. The mischief was managed.

More like this
Entertainment
Jan. 26, 2023
Teen Wolf: The Movie is fan service done right
By Mónica Marie Zorrilla
Entertainment
Jan. 23, 2023
Dungeons & Dragons trailer is the closest we'll get to playing the real game (with hot celebrities)
By Dais Johnston
Entertainment
Jan. 20, 2023
Legend of Vox Machina will continue — even if Dungeons and Dragons doesn't
By Eric Francisco
LEARN SOMETHING NEW EVERY DAY.
Share: