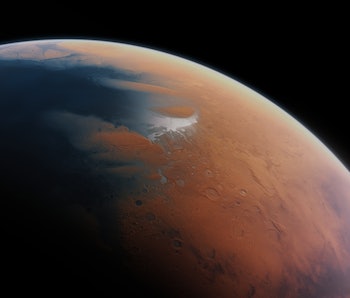 Given the confirmation that liquid water currently exists on the surface of Mars, scientists around the world are eager to investigate just whether Mars really was habitable back in the day – when oceans and vast lakes covered up large swaths of the red planet. Some say likely; some say nope. But the answer, according to a new study, may be that the planet was capable of supporting life for a time. And because it was bombed.

Researchers from the University of Colorado Boulder have just published findings in the journal Earth and Planetary Science Letters that suggest Mars was bombarded 4 billion years ago by an insane volley of comets and asteroids as big as the state of West Virginia. Instead of turning the planet into a hellscape, those impacts helped foster a surface environment that could have dramatically increased the potential habitability of the planet.

Here’s the deal: some new research suggests that, despite having only recently lost most of its atmosphere to solar wind damage, Mars was pretty much always too cold and didn’t maintain enough pressure to really keep bodies of liquid water on the surface for long periods of time. Without warm liquid water, life never had a chance to truly evolve.

The new study hypothesizes that asteroid and comet impacts would have produced enough heat to melt a lot of the subsurface ice and create big lakes and oceans. We would have seen environments similar to the hot geysers that dot Yellowstone National Park — in which microbes capable of withstanding extreme temperatures and acids can thrive.

In addition, the impacts of the giant space rocks could have temporarily increased the planet’s atmospheric pressure and allowed for surface waters to remain stable, at least for some time.

“This study shows the ancient bombardment of Mars by comets and asteroids would have been greatly beneficial to life there, if life was present,” says study coauthor and CU-Boulder geologist Stephen Mojzsis in a news release. “But up to now we have no convincing evidence life ever existed there, so we don’t know if early Mars was a crucible of life or a haven for life.”

Scientists already know that there was a period of interstellar carpet bombing known as the Late Heavy Bombardment, which began about 3.9 billion years ago. A plethora of comets, asteroids, and even moons and planets flew through the solar system and hit whatever innocent rocks couldn’t get out of the way. While Earth’s erosion and plate tectonics have smoothed out most of the damage over billions of years, worlds like Mercury, the moon, and Mars still retain some heavy crater scars.

The research team used the Janus supercomputer at CU-Boulder to simulate the temperatures beneath some Martian craters and assess how they would have heated up and cooled down and affected the surface of the planet.

As a result, it was learned that Mars would have been heated up considerably by the Late Heavy Bombardment — but only for a few million years. This is definitely not enough time to keep the planet warm long enough to really give rise to sustainable life. Nevertheless, it might have been enough time to allow simple organic compounds to coalesce, like amino acids.

Violent bombing has been suggested before as a possible method for terraforming other worlds. Elon Musk has actually proposed nuking Mars to make it warmer and habitable to life. That sounds insane, but it might actually work, if we’re crazy enough to try.

First, however, we might want to confirm whether nature has already tested this out on Mars once before. The researchers think the Mars 2020 rover will give them the best chance to confirm this hypothesis, and they’re hoping to suggest sites the rover should explore in order to collect relevant data. If the theory gets confirmed, get ready to have a lot of other mad geniuses suggest we nuke the hell out of Mars as well.