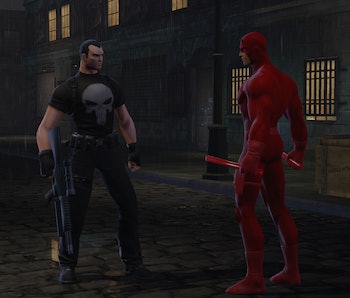 Anything with a mix of escapism and ass-kicking in American pop-culture probably has a video game tie-in. That’s just how the world works. But it makes for a suspicious gap when a major property doesn’t get an interactive extension — even if it is super bad.

Personally, I love to look back at how obvious homeruns like this slipped through the cultural cracks, and I love reporting on the rare cases where studios get this right.

So where is Daredevil?

Here’s the thing: Daredevil did a double hit. Beautiful Idiotman Ben Affleck helped turn the 2003 outing into one of the rare superhero outings pre-Iron Man that had a voice and a style and any semblance of world building. It had a universe with limitations and welcoming mix of comic book nonsense and real world grounding. This was exactly the right time for a Xbox era video game to emerge. Now, we’re in a Daredevil resurgence, with the new Netflix take taking a grittier look at the world. Between the two, it is time for a game.

But what would it look like? Daredevil’s powers are show in very different ways in the different interpretations. And it turns out someone tried to make the Affleck film version into a game called Daredevil: The Man Without Fear.

GXZ95 has footage of the cancelled game and some information about it.

It was developed by 5000ft, and it would have been published by Encore, the game was later cancelled in 2004 because Navarre Chairman and Eric Paulson and CEO of the Navarre Corporation said their management decision is to shut down the development of Encore’s video game console projects which primarily consisted of the Daredevil video game project. As a result, the Company wrote off $4.3 million of development costs during the quarter and a total of $5.6 million for the fiscal year. These charges are reflected as a reduction in their gross margin. They have refocused Encore on its core competencies of software publishing.

In this game, you could play only as the main character and you could have 22 stages to explore while trying to save your friend Foggy. Kingpin and Elektra were surely to make an appearance, too, as for the other characters. As weapons there were his radar sense, the billy club and a grapple hook. Enough for the missions and the randomized crime around the city. This was supposed to continue the series of Marvel based games, such as Spider-Man and X-Men, but it didn’t work out after all.

This mix of Spiderman action and Tony Hawk gameplay looks like it would’ve been pretty fantastic if it came together into a finished product. But that’s also by 2004 standards. Now in 2016, there’s a lot of options for this game based on how many games are now moving into the space of creating interactive experiences for people with blindness.

Our own Jessica Swarts wrote about how interactive gaming for the blind is developing into something powerful right now, and a truly great Daredevil game could do something similar for all players.

It wasn’t until around the 2000s that game designers thought to use an all-audio gameplay, using binaural recording to fully immerse the player. This means that the sound will imitate the position of the source. If a dog is barking to your left, the sound will be on the left and the footsteps of the animal will shift depending on its orientation. The system is meant to give players a kind of three dimensional experience that couldn’t be realized through visually reliant video games.

Unfortunately, despite the potential for a strictly audio-based game that a lot of designers are experimenting with, there aren’t many options, especially not for gaming consoles. One of the only exceptions was a game developed by WARP, a Japanese video game company. This game was designed specifically with blind users in mind. The creator, former musician Kenji Eno, received mail from some from the blind community that enjoyed his previous games because of the music and sound effects. He ended up talking directly to some of his fans and decided to make a game that would be exactly the same for all players, no matter what impairment they or may not have. So while he didn’t make any breakthroughs in gameplay, the only interaction in the game being a few prompts that enabled the player to choose between options for the narrative, but it was a step in the right direction in creating more options for the blind.

That said, this YouTube commenter probably nails exactly what a Daredevil game should be:

And a few days ago, this announcement fooled thousands of Reddit readers.

More like this
Gaming
8.9.2022 9:18 PM
Did you know Netflix has games? Here's how to find them
By Robin Bea
Gaming
18 hours ago
Marvel's next video game could redefine the Fantastic Four for MCU fans
By Willa Rowe
Gaming
8.17.2022 5:16 PM
Leaked Warzone 2.0 release date bodes well for the sequel
By Joseph Yaden
Related Tags
Share: