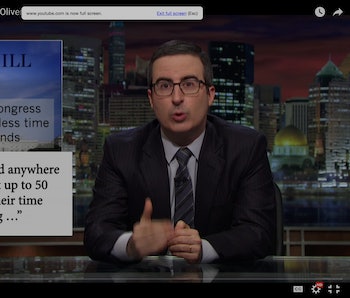 With the 2016 presidential election dominating talk of how fundraising has corrupted the American political system, John Oliver took a step back on Sunday night’s Last Week Tonight to look at how even Congressional members are spending up to half their time begging for money from the donor class.

Oliver found that raising the $1.7 billion netted by candidates for the U.S. House of Representatives and Senate for the 2014 election cycle takes a lot of work. These legislators end up spending huge chunks of time hosting $1,000-per-plate clam shack fundraisers and acting as glorified telemarketers in the Congressional call center. In the 2014 cycle, officials held 2,800 fundraisers in total, leading to some D.C. institutions raking in major cash. Johnny’s Half Shell, a particularly unappetizing-looking seafood restaurant, has catered 948 fundraisers in the past ten years alone.

To flesh out the true absurdity of the state of Congressional elections, Oliver sat down with Steve Israel, D-NY, who recently announced his retirement on the grounds that he is tired of raising money. Though, as Oliver points, over the course of Israel’s 16 years in Congress, he proved his fundraising mettle, even rising to lead the Democratic Congressional Campaign Committee, one of the major organizations tasked with raising cash for Democratic candidates for Congress.

“It’s like finding out this guy hates having bees on his face — I mean, he’s not wrong. It’s absolutely repulsive. It’s just weird that he chose to do it in the first place,” Oliver quips.

As if that wasn’t bad enough, Israel is even guilty of having hosted a breakfast fundraiser at Johnny’s Half Shell, leading a befuddled Oliver to wonder whether anyone would attend an early morning event at a seafood restaurant without expecting anything in return.

It’s another great episode from Oliver, who has already distinguished himself among journalists trying to cover the 2016 elections by actually focusing on important issues and telling the whole story. He has already hit Donald Trump’s proposed wall with Mexico and gerrymandering, and once again he’s right on point.