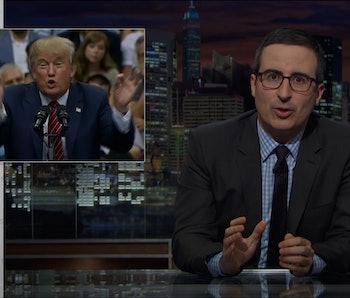 John Oliver was once fairly adamant about ignoring Republican presidential candidate Donald Trump. But those days are gone. The comedian has now dedicated two segments of his show to tearing down Trump on this season of Last Week Tonight. Oliver, setting aside the “racist xenophobia,” on Sunday night tore into Trump’s maligned plan to build a wall at the Mexican border. First, he attacked it for its bloated cost and impracticality before proposing the U.S. would be better off buying $75 waffle irons for every citizen.

“Yes, Donald Trump wants to build a wall on the U.S.-Mexico border, and based on his tone, he always wants to fuck that wall,” Oliver said.

But then Oliver got serious:

“Instead of mocking it or dismissing it out of hand, let’s take a serious proposal by a serious presidential candidate, seriously,” Oliver said. “Instead, let’s focus on the practicality of whether and how it can actually be done.”

He comes to the conclusion that the U.S. wouldn’t gain anything from building the proposed wall except a warm (and false) feeling of safety. And with a conservative estimate of $25 billion to fund the wall, Oliver figures, we might as well spend it on waffle irons, which create the same feeling.

Trump has said from the beginning he plans to make Mexico pay for the wall, and “they’ll be happy about it.”

Oliver isn’t so sure:

“People love it when you make them pay for shit they don’t want, that’s why everyone is so happy when their cable company bundles together cable, Internet and landline,” Oliver says. “Oh, landline, lucky me! That will come in handy when I need to call my cell phone because I can’t find it, and that’s about it.”

Aside from the pricetag of this plan, Oliver also notes the difficulties of securing and transporting the materials, the absence of a building site near the border, and the native American grave sites and endangered species habitats that have already been destroyed by former fence building projects. Pygmy owls tend to be a foolproof to attract some attention on the Internet:

Oliver said he is increasingly worried about Donald Trump’s rise in the Republican party in an interview last week on The Late Show conducted by former Daily Show colleague Stephen Colbert. The line of questions followed Oliver’s other viral show segment, which exposed Trump’s true last name as Drumpf and inspired a lot of people to buy “Make Donald Drumpf Again” hats.

This week’s show didn’t end with another memorabilia slam against the Donald, but it did conclude with puppies.

Last season, Oliver introduced his Dog Supreme Court, comprising a panel of dogs to represent each of the nine justices. (He released footage of the dogs for the media to run in place of in-court sketches, because cameras aren’t allowed in the courtroom.)

With the death of Justice Antonin Scalia, and President Barack Obama’s choice comic-book-selling of federal judge Merrick Garland, Oliver is summoning his fans to choose the dog replacement.

Choose between any of the three candidates, all of which strike a remarkable resemblance to Garland:

Voting ends in a week so make your pick or tweet a more detailed defense of your choice with the hashtag #DogGarland.

More like this
Innovation
Jan. 19, 2023
A robot choreographer reveals why M3GAN — and all robots — should dance
By Molly Glick
Culture
Jan. 29, 2023
Lazy people swear by these 50 extremely helpful, low-effort products
By Cristina Sanza
Culture
9 hours ago
Chinatown Is Still a Thrilling, Clear-eyed Portrayal of the Arrogance of Power
By Chrishaun Baker
LEARN SOMETHING NEW EVERY DAY.
Share: