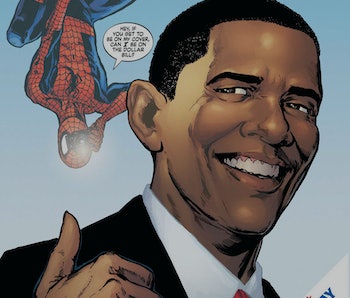 This morning during his speech to nominate federal judge Merrick Garland, 63, for the United States Supreme Court, President Obama described Garland’s heartbreaking path he had to endure to pay for law school: Selling his comic books.

“[SCOTUS nominee Merrick Garland] put himself through Harvard Law School by working as a tutor, by stocking shoes in a shoe store, and in what is always a painful moment for any young man, by selling his comic book collection,” Obama said. “It’s tough. [I’ve] been there.”

Obama, who actually exists in the Marvel Universe since his appearance in The Amazing Spider-Man #583, has regularly spoken about his nerdy childhood spent with comic books and Star Trek.

“What’s remarkable is the way ‘nerd’ is such a badge of honor now. Growing up, I’m sure I wasn’t the only kid who read Spider-Man comics and learned how to do the Vulcan salute, but it wasn’t like it is today,” Obama said in a recent interview with Popular Science. “I get the sense that today’s young people are proud to be smart and curious … I think America’s a nerdier country than it was when I was a kid — and that’s a good thing!”

What’s not a good thing is expediting a conference so he can watch The Force Awakens, but hey, who didn’t skip work for that?

More like this
Entertainment
Jan. 27, 2023
Onyx the Fortuitous and the Talisman of Souls is a cringe comedy as overlong as its title
By Andy Crump
Entertainment
Jan. 13, 2023
Foundation Season 2 could fix the worst thing about the Isaac Asimov books
By Ryan Britt
Culture
Jan. 25, 2023
30 years later, Star Trek is about to pay off a massive villain comeback
By Ryan Britt
LEARN SOMETHING NEW EVERY DAY.
Share: