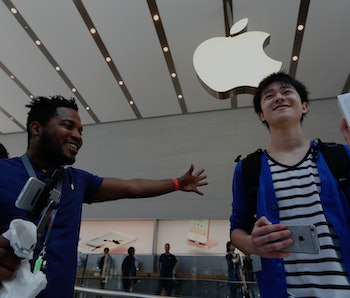 Apple, the revolutionizer of the smartphone and the creator of the tablet, has already shaped the state of computing in incalculable ways. In celebration of the recent passing of the company’s 40th birthday on Friday, all of that stuff is certainly worth remembering. But, the more intriguing place to point your mind on this occasion is into the future to imagine what the company will have come up with 40 years from today on its 80th anniversary.

“We will still have things that are recognizable as a personal computing device — something with a screen and an input device — whether that’s your finger, a pen, a keyboard a mouse, a trackpad or your voice,” Avi Greengart, research director of consumer platforms and devices at Current Analysis, tells Inverse, rapping about the semi-distant future of Apple and personal technology in general. “At some point maybe we’ll have bionic, cybernetic additions to our brain.”

Of course, no one can truly predict where Apple will be four decades from now, but Greengart says a lot of the same technologies we have today could be around for another 10 to 15 years, until Apple or another tech company makes the next huge breakthrough.

Some have predicted Apple’s demise, citing “iPhone fatigue,” lackluster impact of new devices (Apple Watch), or the company’s less-than-24-hour fall from its title as the No. 1 valued company in America. But, Greengart points to the trajectory of personal computers as a reason why Apple could stay relevant 40 years from now. Or even do greater things than it already has.

“Microsoft and Apple still play a huge role in PCs four decades after they pioneered the personal computer,” says Greengart. “It’s only now that a lot of consumers, particularly in emerging markets, are doing their computing on a phone and in many cases they never bought a PC in the first place. Now we’re seeing the PC industry contract and the smartphone industry continue to grow.”

It’s the services Apple delivers — such as iTunes, messaging apps, and social platforms – that have changed most dramatically during the first 40 years of the company. Physical devices, at their cores, maintain the same mechanisms, but switches from iTunes to Apple Music have brought more fundamental changes to the company’s products, Greengart argues.

Apple is likely to expand greatly in the next 40 years, possibly far more so than these first years of the company. Under Steve Jobs, Greengart says, Apple limited itself greatly to a sparse few products broadly defined under consumer electronics.

“The definition of consumer electronics will expand greatly as electronics and computing power becomes a part of almost everything we touch use and interact with,” Greengart says.

Apple’s products are already beginning to expand in the space with three sizes of iPads and iPhone as well as a multitude of laptops and computers that were not at all present under Jobs.

Forty years from now, consumer electronics could mean everything from cars to virtual reality. But even if Apple’s Project Titan electric car does launch in 2020 and it’s a total bust, Greengart suspects Apple is likely to influence the market in some fashion.

“I don’t know if they are going to be building a car, building software that makes other people’s cars Apple-y, or solving transportation problems without building a car at all,” says Greengart, adding that, “Apple tends to apply its approach of simplified user experience that deeply integrates technology and design.”