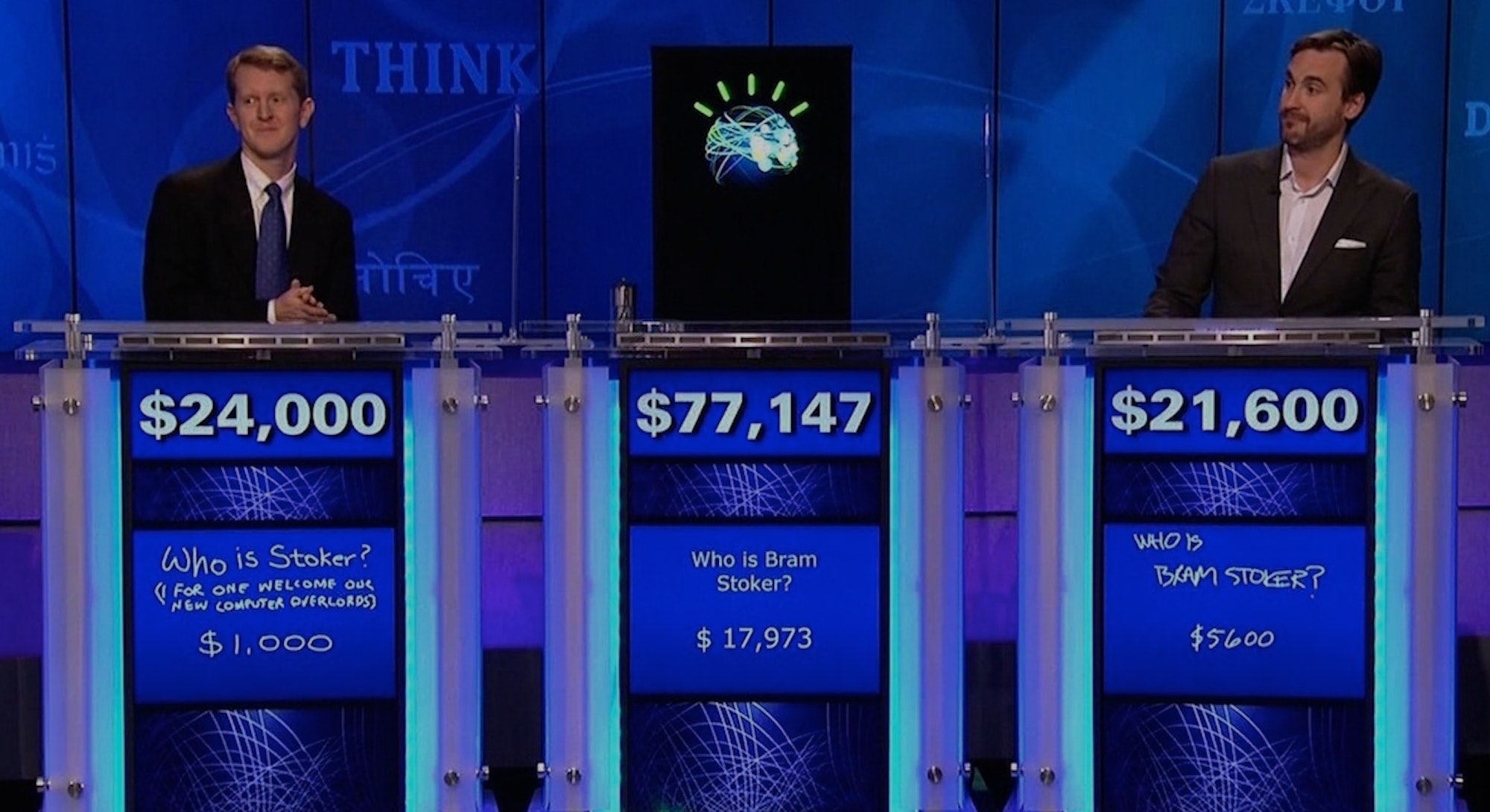 “We were mainly interested in using Jeopardy! as a playing field upon which we could do some science,” Dr. Chris Welty later said about Watson’s appearance on the game show. “We wanted the ability to use questions that had not been designed for a computer to answer.”

Watson was deemed a “question answering machine,” with many wondering if it would be just another machine that beat humans at a game (Google’s DeepMind A.I. would win four of five Go matches. Immediately after collecting the $1 million prize in 2011, IBM set off to apply Watson in real-world scenarios, but the overly publicized attention it got from its TV screen time has since fizzled (aside from the independently run Watson 2016 presidential campaign).

Now that DeepMind’s A.I., named AlphaGo, recently defeated the best human Go player in the past decade, Lee Sedol, IBM is riding the wave of attention on artificial intelligence systems.

“AlphaGo’s victory in the game of Go will inspire many others,” Fredrik Tunvall, a senior client engagement leader at IBM Watson, tells Inverse. “As IBM has shown with Watson, the real work begins after the match, extending innovative technologies to tackle societal challenges like improving health care, education and the environment. We believe that when machines win, humans win.”

But how exactly has Watson evolved from a question answering machine over the past five years?

A Supercomputer Living in Silicon Alley

IBM’s glossy headquarters is nestled on the corner of 4th Avenue and East 8th Street in Manhattan’s East Village. Jeff Koons’ 14-foot-tall metallic red statue of a balloon rabbit is perched in the lobby of the 12-story glass building where over 600 Watson employees work. New York University students flood the area around the building, but few likely realize it’s home to the computer that beat Jeopardy! while they were in junior high.

“You can wave hi to Facebook. They’re just down the street,” says Tunvall, as we look across the bustling city from the fourth floor of the building. New York’s so-called “Silicon Alley,” — a term that goes back to the mid ‘90s — has expanded south from its Flatiron base and is home to many new media and technology companies.

Tunvall walked me through the Watson Experience Center — a dark circular room covered with flat screens that makes you feel like you’ve been transported into a neural network or the brain of Watson. A Siri-sounding voice rattles off the history of Watson and cognitive computing, which IBM describes as the third era of computing.

The mid-‘50s, the first era — the tabulating era — brought forth the calculator which could only perform basic arithmetic. Today, we are in the programmatic era, where machines can process logical structures and “if/then” commands (such as “if not A then B”), but computer scientists must program the rules the computer follows.

Watson straddles cognitive computing and programmable computing, harnessing and processing the more than 2.5 billion gigabytes of data generated each day. Its machine-learning capabilities simulate the human thought process, but is built to eliminate the biases and error out of decision-making.

“The third era of computing, the cognitive era, starts to breakdown the rigidity inherent in that ‘if/then logic,” explains Jonas Nwuke, an IBM Watson ecosystem manager. Cognitive computing is probabilistic computing, where the outcomes vary along a spectrum instead of being strictly “yes or no, right or wrong,” he says.

IBM had been actively seeking the next game it could beat humans at after its Deep Blue supercomputer defeated Garry Kasparov in a chess competition in 1997. In 2004, researchers chose Jeopardy! as its next conquest and began developing Watson in 2005.

In the back of the Watson Experience Center, a LED-powered display begins to flicker with the spiraling blues and greens of the Watson Smarter Planet logo — a symbol of IBM’s mission to “make the world work better.” The system came to life and introduced itself with the trademark greeting, “Hello, my name is Watson.” While the “Watson” in the experience center is just for show, the real Watson that appeared on Jeopardy! in 2011 ran on a set of servers that could fill up the size of a master bedroom. Today, Watson lives in the cloud, IBM filtering its computing power through apps.

Immediately after winning Jeopardy! in 2011, Watson announced its first real-world applications would be in healthcare, as IBM began working with several companies and universities to develop Watson technologies that assist physicians and medical practitioners. In February 2013 at Memorial Sloan-Kettering Cancer Center, IBM and healthcare provider WellPoint commercialized Watson Oncology, a cognitive computing system that supports physicians as they make decisions on treatment. While Watson Oncology specializes in assisting with cancer diagnosis and treatment, Watson has been integrated into broader clinical decision support applications that can identify a wide range of illnesses.

Here’s how the application works: a physician enters observational data and patient information, then Watson draws from the innumerable amounts of scientific and medical papers and generates confidence scores for potential illnesses. With the help of Watson, the physician can then make a diagnosis more accurately and quickly, but it only serves as a tool, not as a replacement, Nwuke emphasizes.

Watson is now incorporated into about 17 different industries and IBM is working with more than 500 partners to build Watson cognitive applications, including retail, law, music, image recognition, the hotel business, and even cooking.

IBM wanted more people to interact with Watson. That’s how senior software engineer in the Watson Life department, Florian Pinel came up with Chef Watson who reasoned, “We all eat, right?”

“Watson has been used in many domains now, particularly in health, but a doctor might not speak to you very much,” says Pinel, Chef Watson’s lead engineer. “I think Chef Watson and other applications we are working on [in Watson Life] give people the opportunity to interact with those cognitive computing technologies in their daily lives.”

In 2014, Pinel, who attended the Institute of Culinary Education in New York before working on Chef Watson, developed the online cooking app to encourage creativity with food. Chef Watson suggests recipes based on three scores: how often ingredients are found together in a bank of over 10,000 Bon Appétit magazine recipes, molecular gastronomy and food chemistry, and creative combinations — introducing new flavor pairings to get chefs out of their comfort zones.

The app can also help eliminate food waste and give new recipes for those who have dietary restraints, as users can plug in food items and Chef Watson will propose a meal. For example, at the IBM headquarters, I challenged Chef Watson to find a recipe with lemonade and it came up with some strange, but creative dishes like lemonade gravy and lemonade shellfish. (Perhaps for IBM’s next challenge, it should enter Chef Watson as a contestant on Food Network’s Chopped).

Tens of thousands of people are using Chef Watson, says Pinel. So far, Chef Watson has served in Yusho’s kitchen, a restaurant in Monte Carlo Resort and Casino in Las Vegas, and had a cook-off at Vince Young Steakhouse during this year’s South By Southwest festival in Austin, Texas. In 2014, Chef Watson even rolled out on a food truck at SXSW.

“Given that a lot of the Watson team is based in Austin and Austin has a food truck culture, the inspiration came, well, ‘how could we get people in the real world to experience Watson in a way that is familiar to them?’ So the answer was a food truck,” says Nwuke, who spent 48 hours on the truck serving muffins and cookies.

Even though Watson hasn’t been in the limelight, it’s sort of secretly taking over the world — we just had no idea the scope of its commercialization. It’s grown up from its short-phrase Jeopardy! answers and moved on to realistic applications. And IBM officials expect an expansion of Watson’s cognitive computing cloud, and more advanced artificial intelligence systems.

“The industry just in the last couple years is really going to move towards solving real problems,” says Nwuke. “You’ve got what we did with Jeopardy! in 2011, and you’ve got what DeepMind did with AlphaGo now a couple weeks back. We look at that and it’s exciting because we are now seeing the promise of this industry come to fruition in a very real way.”