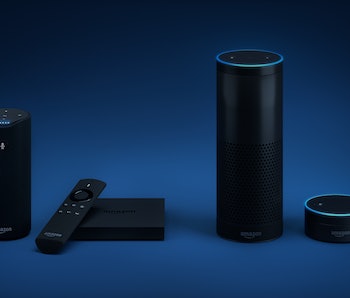 Amazon Alexa is an intelligent personal assistant software that lives inside a speaker. Alexa can answer questions about weather or the stock market, play nearly any song ever recorded on demand, and, of course, order items from Amazon for you. But what separates Alexa from other verbal interfaces is the alacrity with which she interprets your spoken demands. Alexa can answer both specific questions, like “What’s the capital of Vermont?”, and considerably more abstract questions, like “Who’s the man?”

Right now, Alexa is bottled and sold in three forms: Amazon Echo, the full speaker-and-voice system, Amazon Tap, its smaller mobile counterpart, and Amazon Dot, the small hardware device that carries out all the same features but plugs into a speaker. Each product is operated differently, but has the same functionality. All Alexa needs is a speaker and microphone; everything else is just packaging.

So what does this leveled-up version of The Clapper do next? How does this software proliferate? Consumers are only now getting a sense of Amazon’s long-term plans, which apparently don’t involve becoming a hardware company.

Amazon is in the business of giving you whatever your heart desires as quickly as possible. Now it is implementing a natural, instinctive user interface to do so with information. Whereas Siri is chained to Apple products, Alexa is about to go walkabout and potentially become an industry standard. Its apps run on any conventional smartphone. No one needs to buy toilet paper at the store anymore.

Amazon’s Alexa is perhaps best understood as a hardware “wrapper” for the company’s other services. An Echo user can cue up any song on Amazon Music with his or her voice more quickly or naturally than you can scroll through any list of MP3s. It plugs in with other web-enabled services, calendars, and so on to make it handy for providing you with reminders and notifications throughout your day. Then there is the instant integration to Amazon’s rather successful “buy stuff online” functionality. And that’s the point. Amazon, a company with a history of taking voluntary losses, is happy to provide other services for free if they can hook you on voice ordering. With a quip of “Alexa, let’s buy more paper towels,” they’re as good as purchased and on the way from Amazon.

It’s not a bad deal for consumers.

While Alexa devices can do many things on their own with respect to moving data around the internet, they integrate with other products to unlock capabilities of an entirely different caliber: you can set the temperature of your thermostat, turn the lights on and off, order an Uber to pick to you up, have a pizza sent to the house. Alexa technology is an exciting voice-activated technology that seems to be undergoing development of a sort that yields more tangible, real-world benefits than Siri, whose features seem a little “blah” by comparison. Siri was always closely regulated by Apple, so Siri hacks are a celebrated jailbreak tradition. Alexa’s features seem to play out like a more-robust Siri.

Alexa also gives Amazon access to post-internet consumers. As services like Snapchat, which uses the internet but doesn’t exist “online” in any clear sense, proliferate, shopping behaviors are bound to change. Amazon doesn’t want to put all of its eggs in one basket even if that basket, online shopping, made it a behemoth. Jeff Bezos is too smart for that.

Amazon is already the only name in town when it comes to buying something and having it show up on your front porch within a day or two. Short of setting up an Amazon warehouse on your block, the company can’t much improve on the time it takes to fill your order, put it on a truck, and physically bring it to your door. (At least until Amazon’s ambitious drone delivery program can be found legal, that is.) But they can find ways to make it as easy as possible for you to impulse-purchase your favorite sugared breakfast cereal. Now you need only speak its name aloud.

It’s worth remembering that Amazon’s Fire tablets and e-readers, which never caught on and almost certainly represented a loss leader for the company, were similar “terminals” for the e-commerce side of the business. They were loaded with options for buying e-books, digital movies, and TV shows. They were tablets that functioned as credit cards Amazon could swipe at speed.

Progress in bridging the astounding cognitive gaps between man and machine will usher in the next era of technological development. Amazon’s progress on this front is what differentiates it as a technology company, rather than just another retail business operating online. If Amazon can own, in part, the countless man-and-machine interactions happening every single day, subtle monetization of those interactions could generate huge money for the company.

Amazon is invested in making humans and computers play along as nicely as possible, especially when it comes time to use computers to spend money with Amazon.