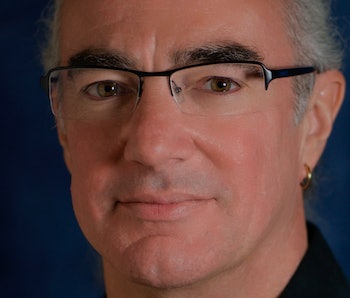 In Asking The Prophet, we probe the brains of sci-fi, fantasy, and speculative fiction writers. This week, we spoke with Alan Smale about alternate histories, researching imaginary worlds, and more.

What comes first in your world building: concept or characters?

In this case, the world came first. I’ve been fascinated for a long time by ancient America, the America that existed long before the Columbus voyages, and I was reading a lot about it. In fact, the impetus behind the Clash of Eagles books was the book 1491 by Charles Mann. I was reading his section about the Mississippian culture — especially Cahokia, the city on the banks of the Mississippi where St. Louis is now — and I knew right away that I wanted to set a story in that city and within that culture. So this time the characters came in second. It’s not always like that, but in this case it was very much the sense of place that began it all.

What was your biggest challenge in writing the Clash of the Eagles books?

Well, I don’t have a Native American background myself, so I didn’t feel that I could speak from the central voices of the Cahokian characters. I felt that I needed to have an outsider coming into their world and exploring it. And so in Clash of Eagles we see Cahokia from the point of view from a Roman soldier. That realization actually came up on me very quickly. It was very early on in the process that I knew I wanted it to be Romans who came across and had this meeting with the Mississippian culture.

So you did a lot of research?

I think I’ve read about 150 books for research since I started doing this project. I’ve written up a whole “bible” for myself about ancient North America and about the Romans and what they all wore and ate and so on. Obviously only a very small portion of all that makes its way into the books. I do like to be as accurate as I can, but a lot of it is just stuff that’s in the background; little details that make Cahokia and the characters feel real. I’m certainly not writing pages and pages of explanation.

What’s the most interesting thing you learned that didn’t make it into the book?

One big thing was the immensity of the trading networks that existed in North America during that era. Some people traveled huge distances, although obviously a lot of people stayed very close to the villages or towns that they’d grown up in. There’s convincing evidence of long trails and trading networks that essentially covered a lot of the North American continent. There were big marketplaces in North America. I was startled by the high degree of interaction between the various North American cultures. So that came as a bit of a surprise to me. The second thing was that when I was researching the American Southwest, I learned that there were many more ruins and remains of the Anasazi – ancestral Pueblan — cultures than I’d been aware of.

What do you enjoy reading? Who do you draw inspiration from?

I really like authors who can do a bit of messing around with history. I’m interested in historical fantasy, secret history kinds of things, so I like Tim Powers and Ian Tregillis. James Morrow has written some very funny and philosophical books over the years, set in the past. More recently I’ve also enjoyed Red Rising and The Martian by Andy Weir because it appeals to the more scientific side of me.

What do you think is the main value of alternate history?

An example: we all know what really happened in WWII, what Britain and Europe were like, so when we look at an alternate, fictional world where events went differently we’re aware of our current world as well, you get that additional underpinning foundation of what happened in the real world. It’s also interesting to look at the historical process itself — how history gets written, how key decisions are made, and how some of the great turning points in history hinged on events and circumstances that were really rather small. It’s fascinating to try to extrapolate what might have happened under different circumstances.

Is there another culture or era that you’d be interesting in using for the future?

I’ve been thinking about that a lot recently, as I come to the end of writing the Clash of Eagles series. Vikings are pretty big right now, partly because of the TV series on the History Channel. If there wasn’t a TV series I might be more inclined to do something in that line, but I wouldn’t want people to feel like I was piggybacking on the TV show in any way. A lot of periods in the English history have appeal to me. Going way back, when I was younger I was very interested in ancient Egypt as well. Lots of possibilities!

Do you watch much TV?

I have a few guilty pleasures. I like Sleepy Hollow, I watch the Vikings TV show, I did enjoy Downton Abbey. Obviously being British myself, I kind of enjoyed that view of the world. It’s quite a deep look into British culture of that time.

Do you wish alternate history had a larger presence in mainstream pop culture?

I think it’s creeping into the culture more and more. I think people understand what it is when they see it, and that’s true generally with science fiction on TV. Speculative elements are now so embedded into the culture that you don’t have to explain alternate universes or superheroes to the general audience. I think that’s also true with alternate history. If there’s an alternate history TV show, people would understand what it was. I haven’t yet seen The Man In High Castle, but I’d like to, and I think it would be great if there were more explorations of alternate history on TV.