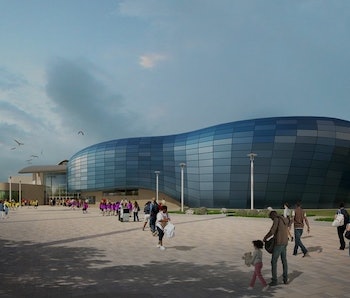 Whether sharp and angular or fluid and curved, we like to attribute character to our buildings, giving them nicknames like the Bird’s Nest (Beijing National Stadium) and the Gherkin (30 St Mary Axe) in London. We’ll soon be able to add a new structure to that list, the “Pacific Visions” wing at the Aquarium of the Pacific in Long Beach, California. Plans for what we may eventually dub “the big glass whale” were unveiled on March 23.

Architect Santiago Calatrava’s “Oculus” train station at the World Trade Center, which opened to the public recently, is easily recognizable for its brilliant white-steel design that resembles a bird taking flight (or maybe it looks like a sun-bleached skeleton of an unearthly monster.) And Foster + Partners’ design for the new Apple headquarters should invoke images of an UFO, with its custom-made, curved glass when it’s completed in 2017 in Cupertino, California. Regardless of whether or not you think these over-the-top buildings are worth their over-the-top price tags, this kind of modern architecture strikes different interpretations.

Here’s our rundown of eight futuristic buildings that remind us of objects in the real-world and whose shape evokes at least a portion of their purpose.

1. Pacific Visions wing at the Aquarium of the Pacific, Long Beach, California

One can see pretty quickly that the gentle undulation of this building’s outline subtly looks like Monstro, the gigantic whale from Pinocchio. The San Francisco-based architecture firm EHDD recently revealed the proposal for the wave-like architecture of the aquarium’s new wing. The building is designed as a biomorphic structure that is supposed to mirror the biological diversity of the Pacific Ocean. Eight-hundred light-diffusing glass panels cover the wing’s surface. Each panel is custom-made to bend sunlight so that it looks like it’s rippling through the ocean water.

Pacific Visions will attract two million visitors per year. The facilities give the old aquarium a two-story immersive theater, a 32 foot-tall curving screen, floor projection discs, an exhibit and art gallery, and a 26 foot-wide media wall. Aquarium officials say it has already raised $40 million of its $53 million production cost and expects the wing to open in 2018.

Anchored on the rolling slopes of a playground for children in the Bois de Boulogne in Paris is a glistening ship with billowing glass sails. This timber, steel, and glass building is the Foundation Louis Vuitton, an art museum and cultural center designed by Frank Gehry — the same mind behind the Bilbao, Spain Guggenheim Museum. When the Foundation Louis Vuitton opened in 2014, Gehry told the Telegraph, “I like to think of it as a sail boat, or even a regatta in the park.”

Located in Beijing’s central business district, this 44-story building is colloquially referred to by locals as “dà kùchǎ” which roughly translates to “big boxer shorts.” CCTV’s headquarters — which houses TV studios, offices, broadcasting, and production facilities — is comprised of two leaning towers bent at 90 degrees at its apex, creating a continuous arch. The architect firm OMA completed the building in 2012, and aimed to create an alternative to the exhausted “tallest skyscraper” trend.

The Lotus Temple is one of the best examples of architectural biomimicry, where nature inspires technology or design. The temple, designed by Canadian architect Fariborz Sahba, is one of eight Bahá’í Houses of Worship in the world. Sahba was inspired by the lotus flower, choosing it as the foundation of the design because of its association with purity of the human spirit. The angles of the concrete and marble leaves are reminiscent of the white arches of the Sydney Opera House. The Lotus Temple opened its doors in 1986, and has since had 70 million visitors.

The National Center for the Performing Arts looks like an egg that was plopped in the middle of a lake near Tian An Men Square and the Forbidden City in China. The dome (or dew drop depending on who you ask) holds an opera house, a concert hall, and a theater. A titanium shell spans 213 meters and is divided by two curved glass awnings that allows light to filter through during the day and figures to be seen meandering in the building at night. The whole structure looks like it’s truly floating as it’s only connected to shore by a 60-meter long transparent underpass in the lake. French architect and professor at Zhejiang University, Paul Andreu, designed the bubble-like structure in such a way that watching a performance may make you feel like you’ve been transported into another world.

The oval-shaped, glass facade proposed in the design mockups for the new Amtek Office Building looks similar to the coiled shell of an ammonite fossil. Architecture firm Ong & Ong’s proposal shows a glass exterior that will allow maximum exposure and transparency of the building’s inner-workings, while aluminum railings will provide “armors” to shield the structure from New Delhi’s climate.

The firm hopes the futuristic style of the Amtek Office will contrast the traditional urban setting that dominates New Delhi’s streets.

7. L’Hemisfèric at the City of Arts and Sciences, Valencia, Spain

Architects Santiago Calatrava and Félix Candela collaborated on this city of eight alien buildings that opened in Valencia, Spain in 2009. The focal building in the complex is the L’Hemisfèric, or hemispheric theater, which is a planetarium, laserium, and IMAX theater. Calatrava, known for drawing from the outside world to create his designs, fashioned the building to resemble a human eye — the pupil holding the hemispherical dome of the IMAX theater. The pool below reflects the elliptical building, creating the full image of the eye. L’Hemisfèric has also earned the name “The Eye of Knowledge.”

The entertainment and cultural complex is considered to be the most modern tourist destination in the city of Valencia, its government describing the city to transcend “the traditional notion of the museum as a storehouse for the custody of works of art. It encourages the present-day concept of culture as a live activity in touch with social tendencies and all kinds of audiences.”

New York firm Asymptote designed this bowl-shaped building that balances on a hill overlooking Daegu’s riverfront in South Korea. The surface of the curved ARC is covered with silver plastic pillows that give a distinguishable quilted texture to the building. The building looks a bit like a creamer container or an oval-shaped bowl. Originally built for South Korea’s 2012 World Expo, the ARC now houses exhibition galleries, a cafe, and a large observation roofdeck.