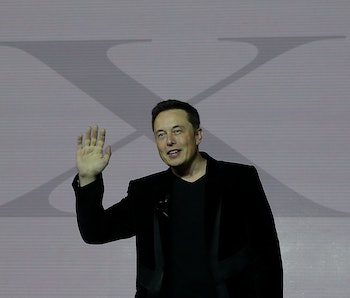 The world will get its first look at the Tesla Model 3 on Thursday, and boy, is the world amped. So much so that Tesla CEO Elon Musk might have to step up his company’s game to cope with demand.

“Looks like we may need to increase production plans for the Model 3,” Musk posted on his much-followed Twitter account on Tuesday, an apparent reaction to a recent poll asking people if they’d put a $1,000 deposit on a Tesla Model 3.

The Tesla Model 3 could represent the sweet spot for electric cars — stylish enough to lure buyers away from traditional luxury cars, packed with cutting-edge technology, and most of all affordable enough to give it mass-market appeal. Musk likes each of his new vehicles to represent a solution to a problem, and it seems like the Tesla Model 3 is his answer to the high price point of many electric vehicles. The Model 3 is expected to retail for around $35,000, which could drop to around $25,000 depending on state and federal subsidies, putting it in direct competition with the $30,000 Chevy Bolt that’s coming out in 2016.

Thursday’s heavily-hyped event will kick off at 8:30 p.m. Pacific; the company is taking reservations for the show, but prioritizing prior Tesla owners first, as well as offering reservations for an actual vehicle once they start production in 2017. You’ll need to put down a $1,000 deposit, which varies based on currency and location (full table here).

Earlier today, CNBC put out a poll asking consumers if they’d be willing to fork over the cash for a Model 3 reservation, and the results were a landslide. Musk was listening, and figured he’d better kick things into a different gear going forward.

Musk is putting a lot behind the success of the Model 3. Tesla’s stock hasn’t had a great 2016 so far, and the company has actually lost money on the sales of prior vehicles in 2015.

Musk insists that Tesla is doing fine, but the affordable Model 3 needs all the buzz it can get to make the company profitable again. If it works, Tesla will make a strong case for the Model 3 being the Ford Model T of the electric vehicle revolution.