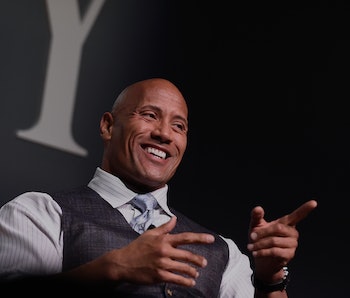 Dwayne “The Rock” Johnson is like the Big Friendly Giant. Versatility is key to his appeal; one of the most intimidatingly huge and vicious pro wrestlers of our time has become a notably sweet and endearing figure in the pop culture universe. The Rock’s gregarious personality elicits a desire to hug him, not cower in fear of his gargantuan size. He’s like a teddy bear, but with bulging quads, a bald head, and lots of flashy projects.

The Rock’s Instagram account is jam-packed with snippets of wisdom and pictures of the figure’s daily, grinding schedule. Through this portal, we’re allowed us to peep his fabulous life — convincing us to watch his TV shows and movies. It barely requires any sifting to strike gold on his account.

If you’ve been looking for #fitspo on Instagram, you need not look any further than The Rock’s account. It’s no secret that he needs to maintain his monstrous physique, but his success is mostly about enthusiasm and zeal. He wakes up everyday before 5 a.m. to workout, but you’ll never see anything other than motivation and pure joy during his morning gym sessions. If you ever needed inspiration to conquer leg day, this recent post from The Rock should do the trick:

He also reveals his swole and enlightened side, especially when he makes this special announcement about his one-of-a-kind water and abrasion resistant gym bag that’s part of Project Rock, a motivational lifestyle brand he’s developing with Under Armour. He’s always selling, forever closing. The guy’s a baller, after all.

So what does The Rock do once he’s worked out harder in one morning than any of us will in our entire lives? He invites children with cancer to come meet him on the set of Baywatch. You can only imagine how great of a dad he must be. Well, you don’t have to imagine, but we’ll get to that later. The adorable and heartfelt caption for this photo confirms that he’s probably an angel sent from heaven—an enormous, benevolent Samoan angel.

Celebrities are often elusive about on-set details, but The Rock is totally inclusive. In this post, he brings us behind the scenes of the HBO show he stars in called Ballers. Have you ever wondered how they get those straight-on shots of people in cars? Well now you know. And are probably more compelled to see the movie he’s shooting. Win-win.

This next post combines two of The Rock’s most admirable qualities: being the most adorable and largest father in the world and his great sense of humor. It was also taken on Valentine’s Day which just adds to the magic of it all. Be sure to peep the size of The Rock’s calf — it’s bigger than a calf, as in, a baby cow.

He can also laugh at himself, which makes him a terrific late night guest. Often, he provides ready-made content for the likes of Jimmy Fallon and Jimmy Kimmel.

He never forgets his roots, either, which keeps his sizable wrestling fan base engaged — and buying tickets to his movies.

He also loves art. Sure, it usually revolves around him, but still, he’s quite the renaissance man with a refined and diverse taste.

The highlights from his account are endless, so check out The Rock’s Instagram for yourself to get your daily dose of motivation and friendly marketing.