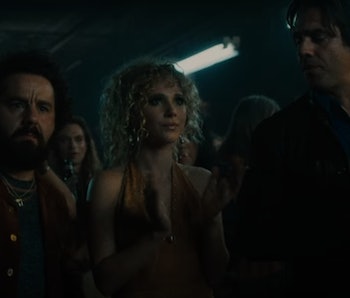 Given the numerous parallels between Vinyl’s self-loathing, decadent protagonist Richie Finestre and Don Draper of Mad Men, it might feel like a logical leap for Jamie Vine (played by Juno Temple) to end up as TV’s next Peggy Olson. But while both period characters are young, female, and determined to climb the ladder in male-dominated industrys, that’s pretty much where the comparison ends.

One of the most satisfying aspects of Mad Men is watching Peggy ascend, slowly but surely, from the position of Don’s secretary to chief of the copy office. And though the same could have been anticipated for Jamie — due to her oft-expressed desire to make something of her life — there’s some misguided feminism at work in the script. Unlike working-class and wide-eyed Peggie, Jamie comes from a privileged background in Manhattan. While most of Jamie’s young, hip colleagues at the tanking American Century record company are under the constant pressure of producing new talent, Jamie lives off a posh relative, and doesn’t appear to worry much about money at all — in fact, she freely supplies her boss Richie with drugs, and even ends up paying for struggling musician Kip’s lunch.

But the most glaring difference between Peggy and Jamie is that, despite Jamie’s many wishes to become an A&R rep, she doesn’t really try that hard to realize her dream. Not only does Jamie seem to lack Peggy’s sharp mind and creative drive, she seems perfectly satisfied to take credit for “discovering” Kip’s proto-punk band, the Nasty Bitz, after swiping their tape from Richie’s inbox and then persuading him to listen to it. Sure, Jamie may have great, even avante-garde taste when it comes to rock bands — but where is her work ethic?

From Mad Men’s pilot to it’s Season 6 finale, we witness Peggy burning the midnight oil, at the expense of a social life. Even in the super-sexist environment of the 60s, Peggy’s brainstorming performance on the Belle Jolie lipstick campaign is impossible to ignore — and as Sterling Cooper executive Freddy Rumsen puts it, “like watching a dog play the piano.” Contrast Peggy’s career advancement to Jamie’s habit of traipsing through the office in super-revealing outfits and heavy blue eye makeup. Does she really have to use her breasts and drugs to get ahead?

Unfortunately, we never find out, as most of Jamie’s free hours are spent primping in front of a mirror for an evening out, or smoking thoughtfully while she watches Kip perform. Jamie does manage to provide Kip with sound career advice after they sleep together, and convinces him of his band’s raw potential and unique sound. But even if the Nasty Bitz is Jamie’s number one priority, one wonders why, while frequenting New York’s rock scene, she doesn’t bother to sign on any other bands — especially when, after insolvency, Richie begins to fire her team members, left and right.

To be fair, though, it’s highly doubtful that Richie will ever adopt Don’s mentorly role; Richie’s too busy sniffing coke. And while Don treats Peggy like a respectful acquaintance, defending her after Pete Campbell rudely criticizes her appearance, Richie is reluctant to take Jamie as anything more than a secretary, reminding her: “and you’re a girl.”

Although Peggy’s ad pitches are often ignored — and she endures a lot of sneering at Pricewater Cooper for her weight and unfashionable suits — Peggy persists. Admittedly, when she starts off as a secretary, she often doesn’t expose mean boys like Pete for their misogynist bullshit; but you can still see her bristling beneath a professionally restrained exterior. Fast forward a decade later, after the emergence of second-wave feminism, bra-burning, and Gloria Steinem — yet Jamie still comes across less like an self-empowered, modern woman of the modern world, and more like a lost waif. During a painful lunch scene with her mother, who calls her an “embarrassment,” Jamie actually gives up trying to justify her lifestyle, and lowers her head in shame.

To her credit, Jamie does displays promising moments of badassdom, as when she threatens the receptionist — “Rat me out again, and I’ll kick you in the cunt” — and chucks a memorable beer bottle at the on-stage Nasty Bitz to make them play, well, nastier. But in the episodes to follow, Jamie not also allows Julie Silver to usurp her opportunity to showcase the Nasty Bitz, sans protest, but ends up fetching him coffee. And when it all goes wrong, she is more than ready to accept the blame. And after it becomes clear that the Nasty Bitz’s other lead guitarist must be let go, for image reasons, Jamie fails to take responsibility, and instead, lets Leister Grimes break the bad news. By reducing her own influence, Jamie risks not only playing a Nancy to Kip’s Sid, but being considered little more than a “groupie.”

Like Peggy, Jamie also faces an endless stream of sexist insults from her male office colleagues, who often refer to her as “sandwich girl.” But instead of besting them, like ballsy PR pro Andrea Zito, Jamie has the annoying habit of remaining frozen and just staring back at her bully vacantly — it’s not even close to confrontational. Unfortunately, the rest of Jamie’s camera time and on-screen presence remains dismally silent and passive. You start to wonder why Jamie has the guts to menace the female receptionist, but can’t bring herself to tell her male counterparts to fuck off.

So I’m hoping — no, I’m praying — for a turn around in Jamie’s attitude and role in the Vinyl episodes to come, and finally see some of her latent potential translate to solid gold. And who knows? We’re still only in Season 1. Jamie’s got plenty of time to prove us all wrong.

More like this
Mind and Body
8.4.2022 7:32 PM
This popular anti-aging goo can help regrow muscle — study
By Miriam Fauzia
Innovation
8.5.2022 6:30 PM
This breakthrough stem-cell therapy could reverse genetic blindness
By Charles Q. Choi
Mind and Body
14 hours ago
Does chewing gum burn calories? The answer may be hard to swallow
By Allison Parshall
Related Tags
Share: