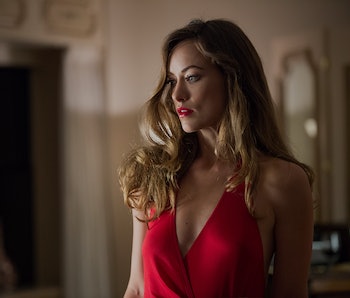 Last night’s episode of Vinyl seemed intent on undoing all the very, very marginal good work the show had previously achieved; at least, it sabotaged any plot element that seemed like it could have waxed interesting eventually. The show has been fighting uphill to define itself as something more than laughably generic in its plotting, and to counterbalance its indulgent musical re-enactment sequences. With its fifth episode, it slipped, definitively, and now finds itself all the way back down the mountain.

Olivia Wilde’s Devon character has been struggling to fight her way into having some agency in the plot, and in “He in Racist Fire,” she got an opportunity, in the most misbegotten and regrettable way possible. In the process, the potential for the character of the funk artist Richie had been wooing, Hannibal (Daniel J. Watts), became marginalized; he’s relegated to being a manipulative, lecherous villain of sorts, rather than the apparent object of Richie’s exploitation one might, on some level, be rooting for. As Hannibal flirts with Devon — and she seems to be responsive to his advances, by way of taunting Richie for taking her for granted — Richie stands by powerless, wanting so much to sign him that he will put up with the baiting.

It’s meant to seem like an “interesting” choice for Devon, but after an encounter with Richie in the elevator mimicking their first sexual experience — and a hacky, over-baked fight featuring Richie firing off “black cock” at her for effect — the whole thing feels totally undermined, and frankly, gross. Later, when Richie finds out Hannibal has signed with his rival anyway, the whole event transforms into something much less than the sum of its parts: It’s reduced to being simply another hiccup in Richie’s storyline. His grief, and clear feelings of regret, are designed to elicit some sympathy for our impulsive, always misguided and addled anti-hero; what it means to Devon is entirely secondary.

Richie’s reaction, of course, is to immediately go undermine another woman, his ex-flame Andrea Zito (Annie Parisse) who he’s attempting to bring on board for an executive position to help save his failing company. Richie admits they broke up because Andrea is not as beautiful as Devon, and that he objects to her being Italian — “like him.” She seems satisfied (she really prizes honesty, I guess?) and signs on to work for him. It’s a good case-in-point of the way the show favors jumping headfirst into edginess and friction instead of working to establish logical, penetrating characters.

With characters like Lester and Kip, Vinyl’s writers continue to string us along with more and more one-dimensional ensemble members. Not even Jamie’s brief one-on-one vignettes (note: sex scenes) with James Jagger’s character in this episode can turn him into something more than a seemingly anachronistic Pete Doherty-like character. It’s meant to be significant that he rocks Big Star records, but how? Lester, on the other hand, wants to change the course of his life — subsumed by resentment and disappointment — but it’s not clear how, exactly, he’s dealing with it. His new managerial position is, by his own admission, a way of fighting back against Richie, but is he really doing that? Or just accidentally discovering that they make a good team — that they are willing to do anything it takes to get new, interesting music (“electric,” as Richie would say) to the general populace? By now, we should have some idea of what is propelling his decisions; its sketchiness feels lazy, not poetic.

Right now, speculating about characters feels like a chore — an intellectual exercise in imagining the conversations that went on in the writer’s room. It’s not because this show is actually managing to “make us think,” or feel. The poor sexual and racial politics, also, have effectively made the show unpleasant to watch, and even more than it had already, the boorish, testosterone-fueled ride we feared it would be from those first noxious promo ads.