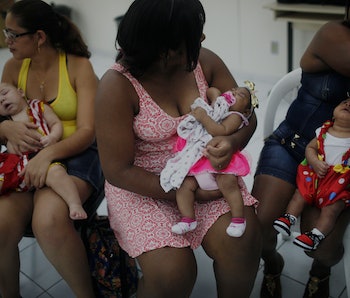 Zika is spreading: Panama’s first microcephaly case ended with the baby dying a few hours after birth, reported the World Health Organization during a wide-ranging press conference on Tuesday. Some two-dozen vaccines are being explored, but it will take time before they are widely available.

Doctors are also refining their estimates regarding babies born with microcephaly — atypically small heads — or other neurological abnormalities, in northeast Brazil, where the virus is the worst. Of 6,480 cases of suspected microcephaly, some 2,000 have been examined. “Of those, 863 births were confirmed with abnormalities,” said Anthony Costello, a British pediatrician and head of the WHO’s child health department.

If this ratio holds — 39 percent of suspected cases are in fact microcephaly — that means northeastern Brazil will have about 2,500 cases all told. In other South American countries, the virus has not been around long enough for exposure during early pregnancy.

Even in Brazil, questions remain about the association between Zika and birth abnormalities. There’s mounting circumstantial evidence the two are linked and scientific thinking is trending in that direction. What’s more: If the pattern is confirmed, the planet will have a health crisis on its hands.

The background rate of microcephaly reported in Brazil was 163 cases per year, on average, for five years before the Zika outbreak, Costello said. That’s in line with what we know about French Polynesia, where studies found that the average three cases per 10,000 jumped to 95 cases per 10,000, good for a 20- to 30-fold increase following a Zika virus episode.

The WHO was more certain about factors like sexual transmission. “We are receiving reports of more cases of sexual transmission,” said Chen. She confirmed the virus is present in semen and urged travelers to use condoms to prevent spreading the disease, but did not definitely answer whether or not a woman can spread Zika to her partners. Conspiracy theories were blissfully absent.

Looming over the Zika update was more bad news, this time about the WHO: “If money continues to not come in,” director-general Margaret Chen said from the WHO’s headquarters in Geneva, “I don’t know how long we can continue like this.”

The WHO currently has about $3 million of a desired $25 million in funds to fight Zika; so far the efforts to combat Zika have primarily focused on the Americas, but the agency’s latest mission is to Cape Verde, an island off the coast of Africa where Zika broke out earlier this year.

It was most forthcoming about the agency’s possible looming budget crunch. “The situation is still pretty serious in terms of lack of funding,” Chen said. “I don’t want to rob Peter to pay Paul.” The agency can borrow some internal funds and can currently get by without taking resources from its AIDS/HIV program and other projects. But curbing Zika won’t come cheap, and in many areas affected with Zika the antiviral infrastructure must be built from the ground up.

In Cape Verde, for instance, some $50,000 is being spent on diagnostic equipment that the country does not have. That’s crucial — it’s unclear if Zika had transmitted from Brazil, as both countries share frequent travelers as well as the Portuguese tongue; or if this outbreak had stemmed from Cape Verde’s proximity to mainland Africa. And as of yet, Chen said, the possibility of two strains had not been ruled out.

Watch the full hearing on Periscope:

More like this
Mind and Body
2 hours ago
These two daily activities are wreaking havoc on teens’ sleep
By Horacio de la Iglesia and The Conversation
Mind and Body
Sep. 21, 2022
Is someone you care about going through a medical crisis? Here’s how to best support them
By Katie MacBride
Mind and Body
Sep. 20, 2022
What are the side effects of the new Covid-19 bivalent booster? Here’s what you need to know
By Miriam Fauzia
Related Tags
Share: