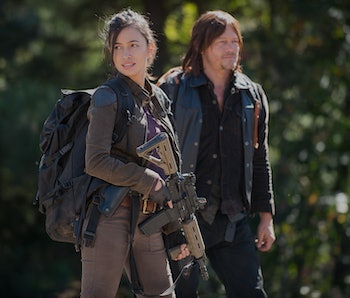 Spoilers for The Walking Dead are below.

Towards the end of the low-stakes episode “Twice As Far,” Denise (Merritt Wever) sums up the reigning rule of The Walking Dead: Risks are necessary. She passionately tells Daryl (Norman Reedus) this seconds before an arrow pierces her skull.

The Walking Dead has a habit of quieting audiences with introspective, self-reflexive themes before blowing shit up. Just last week, Carol (Melissa McBride) and Maggie’s (Lauren Cohan) hostage situation under the Saviors was an hour of The Walking Dead ruminating on faith before unleashing hell. It happened again in “Twice As Far,” a tame hour where two scouting parties — Daryl, Rosita (Christian Serratos), Denise, and Abraham (Michael Cudlitz) and Eugene (Josh McDermitt) — enter the zombie-filled wild. Denise and Eugene, each party’s weakest links, throw themselves into the fire just to prove something. It ends with mixed results.

Hilltop was a wake-up call. Establishing a relationship with farmers who aren’t fighters that are subject to the monstrous Negan (Jeffrey Dean Morgan, who has yet to show up on screen) seems to have motivated everyone in Alexandria to step up in the way only Rick (Andrew Lincoln) and his group can. Denise, who isn’t physically fit for the apocalypse, and Eugene, whose cowardice has cost much in the last few years, both scout as an excuse to “grind,” which is basically a tactic World of Warcraft gamers use to boost their skills so they’re prepared for the big boss battle. And the biggest boss is coming to The Walking Dead very, very soon.

For those trying to keep track, here’s a quick guide:

More like this
Entertainment
Feb. 1, 2023
In Knock at the Cabin, a Terrific Dave Bautista Saves M. Night Shyamalan From Himself
By Hoai-Tran Bui
Entertainment
Jan. 31, 2023
The Last of Us Episode 3 Proves the Show Understands What The Walking Dead Forgot
By Hoai-Tran Bui
Culture
Jan. 26, 2023
Maze Runner: The Death Cure helped kill the YA dystopia. Can it help revive the genre too?
By Mónica Marie Zorrilla
LEARN SOMETHING NEW EVERY DAY.
Share: