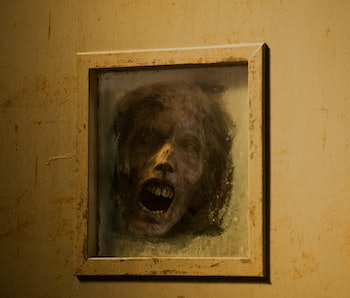 It’s only a coincidence that 10 Cloverfield Lane, a semi-sequel to the 2008 monster movie with characters confined to one space, opens the same weekend The Walking Dead unfolds within four walls, when otherwise it sprawls across the southern United States. Though “The Same Boat” is unspectacular, it’s an effective character study for Carol, and it adds a wrinkle to the larger Negan mystery.

After the raid on Negan’s compound, The Walking Dead tones down the action to focus on Maggie and Carol, kidnapped by some of Negan’s Saviors. Stuck together, they huddle in a safe house, and both await reinforcements from their respective sides, leading to a tug-o-war of wits and psychology. The episode tries hard with Stockholm Syndrome, humanizing these extra characters even though you won’t care about their names, or attitudes about religion. It’s admirable, but futile, because Negan is a monster and there’s no stopping him.

Negan continues to hang over The Walking Dead despite not appearing in a single frame. His followers proclaim “We are all Negan,” as some kind of agnostic rallying cry. The episode tried desperately to establish that many, like Negan’s men and women, have abandoned traditional faith (Carol’s ruse with her rosary and the snide comments, for example) so Negan’s true power over his people remains to be seen. (Side note: I’m not a Walking Dead comic reader, so if the book answers that, I wouldn’t know.)

Carol continues to be (and even set people) on fire in The Walking Dead. She’s never played possum before — at least, not in the way she did this week — and her mind-fuckery of playing the weak woman she only used to be was an Oscar-worthy ruse (within the world, Melissa McBride is a good actress, but tonight wasn’t an Emmy nomination). It was also really lucky. It can be dangerous for a great character like Carol to acquire too many narrative superpowers. She becomes so perfect and so lucky it can becomes a snooze, but for now The Walking Dead has played it smart. Let’s just hope the show keeps using its brains to sustain the smart characterizing instead of, I don’t know, eating it.

“We are all Negan” is either a curve ball, even if the show is smarter than that, or a sign of Negan’s ferocity; he instills a god-like fear in his people. Neither answer gives comfort. Negan is a nightmare incarnate. He’s on his way, and all you can do is just sit and wait.

More like this
Science
Jan. 28, 2023
How does the placebo effect take hold? A doctor explains two influential factors
By Kathryn T. Hall. and The Reader
Mind and Body
Jan. 21, 2023
Procrastination study suggests a link to shoulder pain, bad sleep, and more
By Eva Skillgate, Alexander Rozental, Fred Johansson and The Conversation
Entertainment
Jan. 31, 2023
The Last of Us Episode 3 Proves the Show Understands What The Walking Dead Forgot
By Hoai-Tran Bui
LEARN SOMETHING NEW EVERY DAY.
Related Tags
Share: