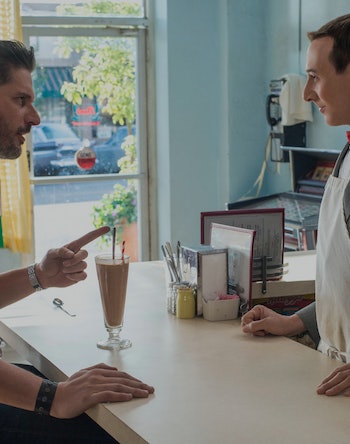 Pee-wee Herman is returning to movie screens for the first time in nearly three decades. While fans may recognize plenty of the same iconic Pee-wee humor from their childhoods, something is a little refreshingly different. Netflix’s new Judd Apatow-produced movie Pee-wee’s Big Holiday — with actor Paul Reubens reprising the role of his hyper man-boy alter ego — manages to send Pee-wee on a journey of self-discovery: A quest for something more than an inanimate object, like his bike in director Tim Burton’s 1985 film Pee-wee’s Big Adventure. Instead, Pee-wee takes a journey from his 1950s time-warp hometown Fairville to New York City just in time to attend the birthday party of his newest friend, actor Joe Manganiello.

While the film is billed as a friendship romp, it seems Reubens, who used asexuality to avoid cultural outcry in the 80s, can now embrace the queer subtext.

The character still maintains his childlike wonder, and everyone in idyllic Fairville refers to Pee-wee as a boy. But Big Holiday shows him growing up — if ever so slightly. Pee-wee has always been deliberately asexual. It allowed Reubens to cling to the adolescent “aw shucks” tone that made countless fans embrace the character through Pee-wee’s Playhouse and his manic leaps to the big-screen — but also leave room for academic and cultural interpretations of Pee-wee to run wild at the same time.

But here, the narrative framework of the movie is that of a romance. One person (in this case, Pee-wee) goes on a harrowing journey and, against all odds, makes it to his destination, reunited with a romantic interest (Manganiello). This after Manganiello rides up on a motorcycle to the Fairville diner where Pee-wee works, hunkers down at the counter to order a milkshake, causing Pee-wee to whip one up in a display of affection. “Mmmm,” croons Manganiello. “Top five, all time,” he says of the shake, as Pee-wee stares in awe.

Soon after, Manganiello convinces Pee-wee to join him on a motorcycle ride, to which Pee-wee answers in a possible double entendre, “I have kind of limited experience on a motorcycle.”

Later, after he finds himself in the company of a shotgun-wielding farmer with nine eligible daughters, in a series of slow motion shots Pee-wee has a hallucinatory dream of his birthday meeting with Manganiello with sparks flying behind them. Earlier, when he escapes three outlaw women, he finds one of them (played by Alia Shawkat) is also named Pee-wee, and like Dottie before her, she develops a crush on the besuited one.

Critics could remind people that Pee-wee and Manganiello, who is married to actress Sofia Vergara in real life, only share a platonic friendship. But they’d forget that Pee-wee has always been steeped in queer culture, and now, we’re in a place where it doesn’t have to be coded to get on air. In a New York Times Magazine profile on the character’s comeback, Reubens initially described the relationship between his character and Manganiello as ‘‘a bit of a bromance,’’ but recanted it slyly.

“It’s a movie about friendship, and ‘bromance’ is a way to take a friendship and put an undertone to it that’s unnecessary,’’ he said, though when pressed about the character’s homoeroticism: “Reubens flashed a grin unmistakable in its mischievousness and replied, ‘I have no idea what you’re talking about.’’

Over the years, reams of dense cultural criticism have been written about Pee-wee’s sexuality, and the way he challenged hetero-normative culture. Whether Reubens intended for the character to be gay or not is almost beside the point, though (interviews with magazines like The Advocate)[http://www.advocate.com/arts-entertainment/theater/2010/01/28/pee-wee-herman-flying-high] over the years show that he was certainly not discouraging the notion.

Now, he can be even more direct, even if there’s no full confirmation.

When Pee-wee makes it to New York only to find himself stuck in a well in Central Park and potentially missing the party, Manganiello pouts in his bedroom, ignoring his party guests because all he ever cared about was his grey-suited significant other. But it inevitably gets cleared up, with the two toasting “to friendship” before Pee-wee rides off in the sunset, this time with Manganiello in tow.

Reubens has been able to play with certain expectations about it as his character up to a point, but now with Pee-wee’s Big Holiday it seems he’s made a definitive and refreshing statement about sexual acceptance. A Netflix kid’s movie may seem like an unlikely place to do it, but complaints would be missing how candid the playhouse of Pee-wee has always been.